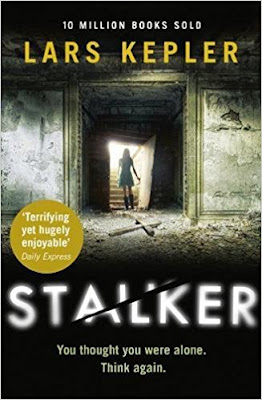 A film arrives at Stockholm’s National Crime Investigation Department showing a woman in her own home, plainly unaware she is being watched. The police don’t take it seriously … until she is found murdered.

When the next video arrives, Detective Margot Silverman frantically attempts to identify the victim. But it’s already too late. Because at the time the video was sent, the killer was already inside their house…

BEFORE IT’S TOO LATE

Soon Stockholm is in the grip of terror. Who will the Stalker target next?


My review of Stalker 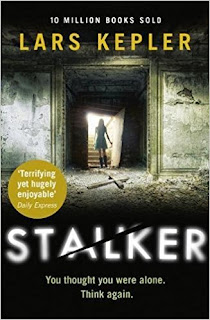 Stalker is the fifth book in the Joona Linna detective series that is set in Sweden. I read The Hypnotist, the first book in this series many years ago and have enjoyed all of the books in this series. I do feel that to get the absolute best from this  book, and to fully understand the characters, you do need to read the books in order, but this novel will still work very well as a stand alone.

The story is told in third person present and I found this style very easy to read, while adding to the menacing and slow tone of the narrative. This is a slow read, and a rather long one, but in true Nordic Noir fashion, you do need to take your time while reading it, so as to become fully immersed in these characters lives. The slow and descriptive nature of the novel also helped me to understand what it must be like to live in Sweden. I love Nordic Noir and Stalker fits very nicely into this genre.

The plot is incredibly complex, with many different characters being introduced along the way, some incidental, and it did became a little confusing at times, but all were important to enhance and further the plot. The main trio, as I saw them, were Margot Silverman (detective), Joona Linna (ex detective and presumed dead) and Erik Bark (a psychiatrist and hypnotist who is also Joona's best friend). All three play a pivotal role in tracking down the stalker/killer, and I liked all of them.

This is a dark and menacing read about the victimisation and personification of women. Many of the scenes featuring the stalker are graphic and I did find them upsetting. It is also an oppressive read, in the fact that I felt at times that it was difficult to breathe wile reading because of the sheer terror that these victims faced. It frightened me, and not many books truly scare me. I think this is because the novel was incredibly realistic, in that it was so easy for this individual to stalk victims, to film them, to then carry out the brutal and planned murder and to then post what they had filmed onto the internet. It was shocking to read.

Stalker is not an easy read, and it would be wrong to say that it is an enjoyable read, because it is not. But it is does make you think about how women are portrayed via the media, and of how women are often seen as victims. But the most satisfying part of this novel is that the lead detective  is a woman, who is completely fearless and who will do all she can to seek justice.

If you love Nordic Noir, want a challenging read, that is a slow burner, and will raise many moralistic and social questions about the kind of society that we live in, then Stalker is a good choice.

Stalker, published on 1 June 2017 by Harper Collins, can be found on Amazon here

Lars Kepler is the pseudonym of Alexandra Coelho Ahndoril & Alexander Ahndoril, both critically-acclaimed writers under their own names. Alexandra Coelho Ahndoril’s first novel Stjärneborg (Castle of Stars) has been translated in several languages while Alexander Ahndoril’s novel The Director, about Ingmar Bergman, was shortlisted for the Independent Foreign Fiction Prize. They live in Sweden.The Hypnotist is the first in a series featuring Detective Inspector Joona Linna.
Posted by jo at 05:00