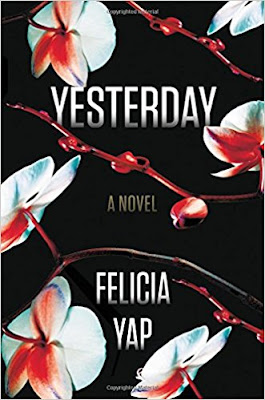 How do you solve a murder when you can only remember yesterday?

Imagine a world in which classes are divided not by wealth or religion but by how much each group can remember. Monos, the majority, have only one day's worth of memory; elite Duos have two. In this stratified society, where Monos are excluded from holding high office and demanding jobs, Claire and Mark are a rare mixed marriage. Clare is a conscientious Mono housewife, Mark a novelist-turned-politician Duo on the rise. They are a shining example of a new vision of tolerance and equality-until...

A beautiful woman is found dead, her body dumped in England's River Cam. The woman is Mark's mistress, and he is the prime suspect in her murder. The detective investigating the case has secrets of his own. So did the victim. And when both the investigator's and the suspect's memories are constantly erased--how can anyone learn the truth?

Told from four different perspectives, that of Mark, Claire, the detective on the case, and the victim--Felicia Yap's staggeringly inventive debut leads us on a race against an ever-resetting clock to find the killer. With the science-fiction world-building of Philip K. Dick and the twisted ingenuity of Memento, Yesterday is a thriller you'll never forget. 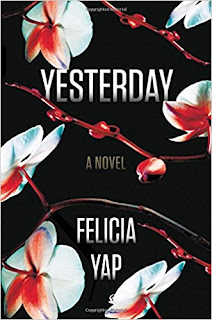 My review of Yesterday


Yesterday is such a wonderful read. It is deliciously different, with distinctive and compelling voices that made it very difficult for me to put down. I loved this book and I believe that it deserves all of the hype that is being splashed about on social media. This book is going to be huge.

So, what's it about? Well, a woman is found dead in the River Cam, in Cambridge. Although the death appears to be an apparent suicide, the detective leading the investigation believes that the woman was murdered and what follows is a murder investigation like no other. This is partly due to the world that the book is set in. Although set in 2015, in Cambridge, the world is one that we do not know.

The world is divided into Monos and Duos. Monos can only remember yesterday, Duos can remember two days. Memories are stored in the iDiary, although previously to its invention, diaries were in pen and ink form. Memories that are important can be learned and are stored as Facts. It is this premise which makes the book a unique detective slash domestic thriller type of a read. The book really is quite a work of genius.

Yesterday is set within a 24 hour time frame. The detective, Hans, has given himself 24 hours to solve the crime. We read his thoughts and feelings in diary format. The moment I met him on the page, I liked him, and I feel that this was important.  The book is told from four unique points of view which helped me gain much insight into what had happened in the past, what has led up to thr woman being found dead in the Cam.

We hear the viewpoints of the mixed married couple, Claire and Mark. Claire is a Mono housewife, whereas Mark is a successful Duo novelist. Their points of view are both compelling and help to shed light on their unique relationship. The final point of view is told from the dead woman's diary entries, and it is these chapters that I enjoyed reading the most. Her entries are gut wrenchingly real, in your face and not easily forgotten.

Claire and Mark as a couple completely intrigued me. Married for twenty years, their relationship has been a little rocky for the past few years, but to the outside world, they are a happy couple. When the woman is found, floating in the Cam, these insecurities and problems are brought to the surface and the cracks begin to appear. The dead woman was Mark's mistress and he is the number one suspect. What we read is their account as a married couple. Can Claire truly trust Mark?

Yesterday is one clever read. It is a tale of honesty and of truth, and asks the question, who can you believe when you can only remember yesterday? Are memories truly real? It's a fascinating subject and one that makes for a fascinating read.

This is a domestic, detective thriller like no other I have ever read. It is sharp, witty and pulls no punches. It's an unpredictable read, and kept me guessing until the very end.

Yesterday is published by Mulholland Books on 1 August, 2017. It is available to buy from Amazon  here.

I won a proof copy of Yesterday from the author via a twitter giveaway.