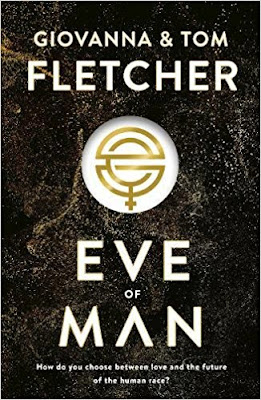 About Eve of Man

AGAINST ALL ODDS, SHE SURVIVED.
THE FIRST GIRL BORN IN FIFTY YEARS.
THEY CALLED HER EVE.

All her life Eve has been kept away from the opposite sex. Kept from the truth of her past.

But at sixteen it's time for Eve to face her destiny. Three potential males have been selected for her. The future of humanity is in her hands. She's always accepted her fate.

Until she meets Bram.

Eve wants control over her life. She wants freedom.

But how do you choose between love and the future of the human race?

EVE OF MAN is the first in an explosive new trilogy by bestselling authors Giovanna & Tom Fletcher.

My review of Eve of Man 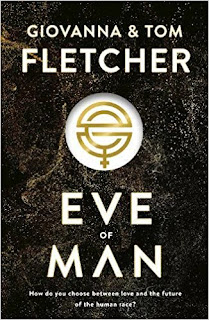 Oh my word! I was beyond excited to read this book and couldn't wait to dive on in. Well, I wasn't disappointed. This is a fantastic read, and although geared towards the young adult market, I thoroughly engaged with the two young central characters, Eve and Bram, and eagerly followed their story.

This is a fairly long book at just over 400 pages, but I read the book quickly.  Chapters are short and the pace fairly quick and acton packed, so it actually felt like a much shorter read. The way in which the book is structured is also easy to read, with Eve and Bram having their own chapters. Although each chapter is introduced with the character's name, their voices are truly unique. This is of course because of the two authors, Giovanna and Tom Fletcher. Both characters spoke to me, and I admired and loved both of them, although if I'm honest, Eve took me a little longer to warm towards. Perhaps because it took a while for her to realise what was going on in her secluded world of the Dome.

This book is a dystopian read with a fusion of epic fantasy, sci-if, adventure and good old romance. The dystopian world building is truly compelling and I could easily visualise the elegance and clinical coldness of the Dome, while the world outside was going to hell. The two worlds beautifully clashed.

We then have the fact that the entire human race depends upon this one sixteen-year-old girl. The idea that she has to choose from three eligible suitors made my blood boil, and if, like me, you are initially put off by this element in the book, then don't be. This book is so much more and actually highlights the sheer stupidity and shallowness of such a decision.  It's a book that questions the role that science has to play in our modern world, it also questions how men perceive the female image, of what true beauty really is, and how men objectivity women. It raises many questions about sexuality and the role that women have to play.

Eve of Man was a delight to read. I found it to be pure escapism, with characters that I cared about and a plot that took my breath away. The great news is that this is the first book in a trilogy, and I can't wait to read the next instalment.

With thanks to the publisher and NetGalley for the ARC.

Eve of Man is published by Michael Joseph on 31 May 2018. It can be found on Amazon here.