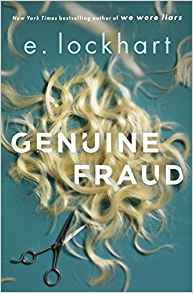 
From the author of the unforgettable bestseller WE WERE LIARS comes a suspenseful new psychological thriller - the story of a young woman whose diabolical smarts are her ticket into a charmed life.

But how many times can someone reinvent themselves? You be the judge.

Imogen is a runaway heiress, an orphan, a cook, and a cheat.
Jule is a fighter, a social chameleon, and an athlete.
An intense friendship. A disappearance. A murder, or maybe two.
A bad romance, or maybe three.
Blunt objects, disguises, blood, and chocolate. The American dream, superheroes, spies, and villains.
A girl who refuses to give people what they want from her.
A girl who refuses to be the person she once was.


My review of Genuine Fraud 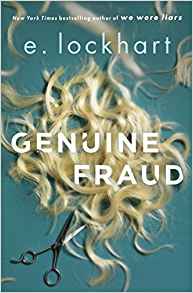 How do I begin to review this book? I am so confused about it. But, perhaps that's the intention? It IS a twisted psychological thriller that is certainly fast paced and which kept me reading. And, I did enjoy it. HOWEVER, I disliked both of the central female characters. It's very unusual for me to like a book but to completely feel no emotion or connection to the characters whose lives I am reading about, hence the confusion. The time frame also jumps about a lot, and I had to reread some passages to ensure that I understood what time frame I was reading in. The plot is complex, and even if I wanted to explain the plot, I'm not sure that I could.

The style in which the story is told is at first somewhat confusing, but after a few chapters I eased in to it and understood where the author was coming from. It's an interesting writing style, and made complete sense to me. It also worked well with the overall suspenseful theme, and in learning the truth about Jules.

So, that leads us to Jules, whose head we are in. Although told in third person (which I liked) she has a really distinctive voice that helped to convey her as an unreliable narrator. What is refreshing is that Jules does not conform. She is her own woman, does what she wants, but I did not like her because of this. Is she a bad person? Is she a victim who simply does bad things? To be honest, by the end of the book I was none the wiser.

As you can probably tell I am still very confused by this book. It challenged me as a reader, and i like to be challenged, to read books that raise questions that make me feel a little uncomfortable.

If you want a book that is a little different, with complex unreliable narrators, then you'll probably like this.

Genuine Fraud is released in paperback on 31st May by Hot Key Books. It can be found on Amazon here.