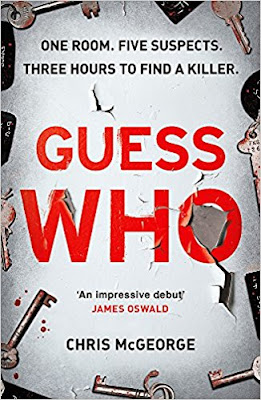 ONE ROOM. FIVE SUSPECTS.
THREE HOURS TO FIND A KILLER.

A waitress. A cleaner. An actress. A lawyer. A student. Everyone is a suspect.

In a locked room - with no escape, and no idea how they got there.

In the bathtub, the body of a man they all knew. Someone murdered him. Someone in this room.

They have three hours to find out. Or they all die.

THE RULES ARE SIMPLE. THE GAME IS NOT

Imagine Agatha Christie had created an interactive Escape the Room game, and GUESS WHO would be the result. For fans of the DI Helen Grace series by MJ Arlidge, The Woman in Cabin 10 by Ruth Ware, Ragdoll by Daniel Cole, and Rattle by Fiona Cummins.

My review of Guess Who 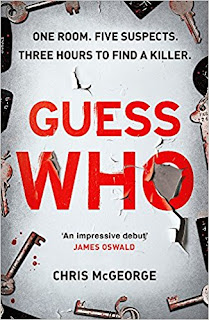 I absolutely loved reading Guess Who. The idea of a modern day 'locked in room' murder was too irresistible to resist. I love a good old who done it,  and this book perfectly blended this genre with a modern and refreshing twist.

Morgan Sheppard is a well known TV personality who hosts his own 'detective' show, created due to his success as a child in solving the murder of his teacher.The show is similar in format to Jeremy Kyle, with the audience booing those who have cheated and lied. We gain snippets of the show throughout the book, which help to shed light on Sheppard's TV personality. Catapulted to fame at a young age,  Sheppard is now a victim of his own hectic and hedonistic lifestyle, and is on the slippery slope  towards self destruction. Sheppard is a complex character, but I found him likeable because of his many flaws and vulnerabilities.

So, he finds himself in a hotel room, with five complete strangers. None of them know how they got there, but the dead body in the bath connects them all, as each and and every one one of them knew him. And all are a suspect. So, the big question is, who killed him? Hand on heart I can honestly say that my number one suspect kept changing, as I made my way through the book, and even towards the end I hadn't guessed who the murderer was. All of these characters intrigued me, all with their unique story to tell.  But, for me, Sheppard was the star of the show.

This is such an addictive read. Chapters ate kept fairly short and there are so many twists and turns that I honestly didnt see the end coming. We get glimpse of Sheppard's life as a child,  during the time his teacher was killed and the mystery surrounding this teacher's supposed suicide. This helped me to gain much needed insight into the man he  then became.

This book is full of black humour, which I love, and I found the balance between the macabre and spontaneously funny moments, just right. I couldn't put thus book down. If you love a good who done it, that is a little bit different, modern, and with memorable characters, then you'll love this book.

Guess Who was published by Orion on 3 May. It can be found on Amazon here.