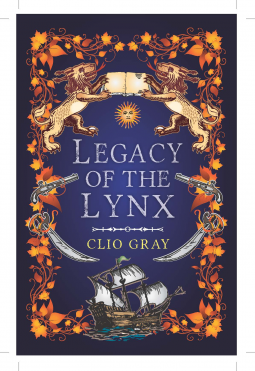 About the Legacy of the Lynx

Golo Eck is searching for the fabled lost library of The Lynx, Europe’s first scientific society, founded in 1603. Fergus, his friend and fellow adventurer, is on the trail of the legend in Ireland when he becomes embroiled in the uprising of the United Irish against English rule. His only hope of escape is Greta, a courageous messenger for the United Irish cause. Following the bloody battles of New Ross and Vinegar Hill, Fergus is missing, and Greta is on the run.

Golo meanwhile suspects other forces are on the trail of the Lynx, and he heads to Holland in pursuit. When Golo’s ship founders and he disappears, his ward Ruan is left to fend for himself, a stranger in a strange land.

Can Ruan pursue the trail to the lost library? Will Golo and Fergus be found? Can Greta escape Ireland with her very life? And will the truth of the Legacy of the Lynx finally be revealed?


My review of Legacy of the Lynx
The Legacy of the Lynx is a beautiful, historical, adventure story that I absolutely loved. I'll admit and tell you that I was drawn to the book, firstly by its beautiful cover, but then, when I read what the book was about, I knew that I had to read it.

Clio Gray is an experienced writer with many books under her belt, but this is the first book that I have read by her. The story is about Golo Eck's quest for the lost library of The Lynx,  that was founded in the early 1600s, Finding this lost library is the key to a more peaceful, democratic and less violent world. Golo truly believes that the Lynx can save mankind. As he is advancing in years, he knows that time is running out, and that together with his fiends, Fergus and Ruan, they will be able to find the Lynx in time.

At the beginning of the book all three characters leave the highlands of Scotland to begin their journeys. Golo and Ruan head to Holland on a boat, while Fergus heads to Ireland. This is when the adventure truly begins.  Fergus finds himself in Ireland during the uprising of the United Irish against the English and has the fight of his life on his hands, to both keep alive and to find the part of the Lynx that is buried in Ireland. From the moment I was introduced to Fergus, I loved him. He is a man who cares for his frend Golo, who is a father figure to him, and who, although only tolerates Ruan, wants the absolute best for him. He is a man with honour and integrity, but also weaknesses, and I found that I wanted him to succeed and to be happy.

Ruan and Golo head to Holland but are quickly separated, leaving Ruan alone and having to search for the Lynx by himself. Although I did not like Ruan at the beginning of the book, I thought him to be spoilt and quite frankly nasty, he most definitely grew on me during the course of the book, and I think that this was the way it was meant to be. He grows into a young man during the book and we grow with him. His journey, I felt, was the most difficult of all, and just like with Fergus, I wanted him to succeed.

I must also quickly mention Greta, as the book is not entirely dominated by men, there are a few feisty women in this book, and Greta is one of them. She helps Fergus through the treacherous Irish streets as his guide. She is a strong, opinionated and likeable character, and I warned to her instantly. I can still hear her dulcet Irish tones in my head.

If you are anything like me, and feel slightly put off when the word 'history' is mentioned in a novel, then please don't be. My historical knowledge is awful, and I found this book to be hugely entertaining without knowing anything around the events that were unfurling during the late 1700s in Ireland. This book is all about the characters, what they learn during their journey. It is a story about adventure and discovery, but for me, I wanted to know what would happen to the characters and if they eventually found their beloved library of the Lynx.

Legacy of the Lynx is a delicious slow burner of a book. The dialogue is intricate and cannot be rushed. You really do need to sit and give yourself a few hours of undivided attention while you read this book. Having  said that, the author packs in an awful lot of action, with alternating scenes between Holland and Ireland, so that you do not become confused as to what journey you are following.

The Legacy of the Lynx is a hugely enjoyable read. If you love your historical novels (or even if you don't), love grand adventure stories, murder mysteries and intelligent writing, in a book that is different from the norm, then you will love this book.


Clio was born in Yorkshire, spent her later childhood in Devon before returning to Yorkshire to go to university. For the last twenty five years she has lived in the Scottish Highlands where she intends to remain. She eschewed the usual route of marriage, mortgage, children, and instead spent her working life in libraries, filling her home with books and sharing that home with dogs. She began writing for personal amusement in the late nineties, then began entering short story competitions, getting short listed and then winning, which led directly to a publication deal with Headline. Her latest book, The Anatomist's Dream, was nominated for the Man Booker 2015 and long listed for the Bailey's Prize in 2016. 'Surprisingly,' Gray says, 'The Anatomist's Dream - although my eighth published novel - was amongst the first few stabs I made at writing a book. Pretty appalling in its first incarnation (not that I thought it at the time!) it was only when I brushed the dust off it a few years ago that I realised there really was something interesting and unusual at its core that I could now, as a more experienced writer, work with. The moral being: don't give up. The more you write, the more self-critical you become and the better your writing will be because of it.' Clio has always been encouraging towards emergent writers, and founded HISSAC (The Highlands and Islands Short Story Association) in 2004 precisely to further that aim, providing feedback on short listed stories and mentoring first time novelists, not a few of whom have gone on to be published themselves. 'It's been a great privilege to work with aspiring writers, to see them develop and flourish,' Gray says. 'There can never be too many books in the world, and the better the books the better place the world will be.'