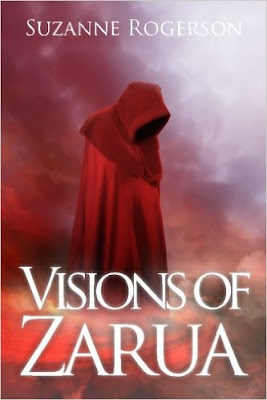 About Visions of Zarua

Two wizards, 350 years apart. Together they must save the realm of Paltria from Zarua’s dark past. An ancient darkness haunts the realm of Paltria. Apprentice wizard Paddren is plagued by visions of a city on the brink of annihilation. When his master Kalesh dies in mysterious circumstances, the Royal Order of Wizards refuses to investigate. Helped by his childhood friend, the skilled tracker Varnia, and her lover Leyoch, Paddren vows to find the killer. The investigation leads Paddren down a sinister path of assassins, secret sects and creatures conjured by blood magic. But he is guided by a connection with a wizard from centuries ago - a wizard whose history holds the key to the horror at the heart of the abandoned city of Zarua. Can Paddren decipher his visions in time to save the Paltrian people from the dark menace of Zarua’s past?


My review of Visions of Zarua


Visions of Zarua is set in the magical world of Paltria, where there are Wizards, mythical creatures and enemies around every corner. This is a dark fantasy novel, that I loved from the very first page. It has to be said that fantasy novels are not my usual genre, but I was surprised by just how much this book spoke to me. Even though it is set in the mythical world of Paltria, and the ancient and abandoned city of Zarua, the book echoed the emotions of everyday, normal life. This is why I connected so much with this book and the characters within it.
The story is really that of two separate journeys. One that is set in present day Paltria, which involves the Wizard, Paddren, and his friends Varnia and Leyoch. Together they set out on a journey to find out who killed Paddren's master, Kalesh. Their journey is aided by the visions that  Paddren has, formed from a connection with Jago, a Wizard from a time that spans back 350 years ago. Although you may think that it would be difficult to follow two very different and epic stories, the journey of Paddren and his friends is told in third person, while that of Jago is in first person narrative. This is one of the reasons that the two stories are so very easy to follow. Each has their very own distinctive voice and style. The use of the first person for Jago's voice is also very clever, as it makes the story come to life.
What is also so very refreshing about this book is that the characters are not perfect, but are flawed and 'human', in that they all have their weaknesses, but are bound together for the better good. Paddren has a shocking temper and at times acts very much liked a spoilt little boy. This reminds us of how very young he is, although he has the weight of the world on his shoulders. His quest is very much supported by the talents of Varnia and Leyoch, who are so much more than supporting characters. They both play a vital role in the story, and  I have to say that I found Varnia to be one of the most exciting characters, and by far my favourite.
Visions of Zarua is very much a mystery stroke who dunit kind of a read,  that just happens to be set in a  mythical fantasy world with Wizards. But the two genres blend so beautifully together. This book really is an exquisite slow burner of a read, that needs to be savoured, there is no rushing this novel. Sit back, relax and enjoy the ride.
With thanks to the author who provided a review copy of the book.
Visions of Zarua is available to buy from Amazon here.


Suzanne Rogerson  lives in Middlesex with her hugely encouraging husband and two children.

She wrote her first novel at the age of twelve. She discovered the fantasy genre in her late teens and has never looked back. Giving up work to raise a family gave her the impetus to take her attempts at novel writing beyond the first draft, and she is lucky enough to have a husband who supports her dream - even if he does occasionally hint that she might think about getting a proper job one day.

Suzanne loves gardening and has a Hebe (shrub) fetish. She enjoys cooking with ingredients from the garden, and regularly feeds unsuspecting guests vegetable-based cakes.

She collects books, loves going for walks and picnics with the children and sharing with them her love of nature and photography.

Suzanne is interested in history and enjoys wandering around castles. But most of she likes to escape with a great film, or soak in a hot bubble bath with an ice cream and a book
Posted by jo at 06:00