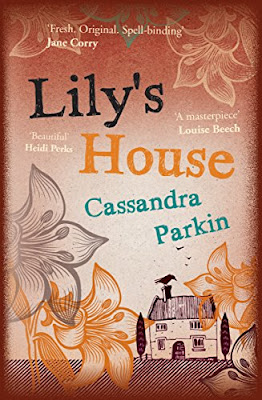 About Lily's House
When Jen goes to her grandmother's house for the last time, she's determined not to dwell on the past. As a child, Jen adored Lily and suspected she might be a witch; but the spell was broken long ago, and now her death means there won't be any reconciliation.

Lily's gone, but the enchantments she wove and the secrets she kept still remain. In Lily's house, Jen and her daughter Marianne reluctantly confront the secrets of the past and present - and discover how dangerous we become when we're trying to protect the ones we love.


My Review of Lily's House


I was first attracted to Lily's House because of the subject matter, that of a granddaughter returning to her grandmother's house, following her death. From the book's blurb it is obvious that something happened between them, for Jen to not be able to say goodbye to her grandmother before her death, and this thought ate away at me. I needed to know what had happened between them and what their unique story was. Throughout the book we are told their story, and it is beautiful.

This is such a beautifully crafted book about the love between mother and daughter and, granddaughter and grandmother. The book is dominated by the strength of women and how women support each other during the lifespan.

We are firstly introduced to Jen and her daughter, Marianne, as they slowly make their way to Lily's House by train. The present day is intertwined with memories gone by of when Jen was a little girl and used to stay at Lily's house. This is the structure of the book, as the present day goings on are intermingled with flashbacks of how life used to be for Jen and the freedom that she felt at her gran's house. These chapters in the book brought a lump to my throat, as they reminded me of the times that I used to stay at my grandmother's house as a little girl, when my grandfather was still alive. The images of eating cake, playing in the garden, and the absolute freedom that I was given. All of my memories were brought to the surface, making Jen's feelings and emotions even more raw.

Throughout the book we are also observer's to text messages between Jen and her husband, Daniel. In fact this is the major way in which we learn about his character. This I thought, was a very clever narrative device. We are also able to read flashbacks of their time together from when they first met, which also helps to shed a light on their present day relationship.

Then we have the relationship between Jen and Marianne, the way in which they both care and support each other. Marianne is on the brink of adolescence and, it is time for Jen to learn to give her some independence and to allow her to become the young woman that she so desperately wants to be. The scenes between the two of them were so beautifully told. The dialogue flowed so easily and was just how a mother and daughter communicate with each other, with all of those unsaid inner most thoughts.

Lily's House is a story about a granddaughter and grandmother and the life that they shared. But it is also about the strength of women and the special bond that women have with each other. I adored this book, which is full of several twists and turns. I loved it. It is a very special book indeed.

With thanks to NetGalley and Legend Press for a review copy.


About the Cassandra Parkin

Cassandra Parkin grew up in Hull, and now lives in East Yorkshire. Her short story collection, New World Fairy Tales (Salt Publishing, 2011), won the 2011 Scott Prize for Short Stories. Her work has been published in numerous magazines and anthologies. Author of The Summer We All Ran Away (2013) and The Beach Hut (2015).

Lily's House is published by Legend Press and is available to buy from Amazon here
Posted by jo at 04:00