The Girls Next Door by Mel Sherratt 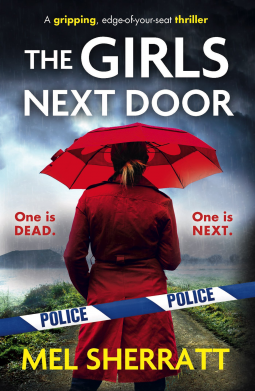 One warm spring evening, five teenagers meet in a local park. Only four will come out alive.Six months after the stabbing of sixteen-year-old Deanna Barker, someone is coming after the teenagers of Stockleigh, as a spate of vicious assaults rocks this small community. Revenge for Deanna? Or something more?

Detective Eden Berrisford is locked into a race against time to catch the twisted individual behind the attacks – but when her own niece, Jess Mountford, goes missing, the case gets personal.With the kidnapper threatening Jess’s life, can Eden bring back her niece to safety? Or will the people of Stockleigh be forced to mourn another daughter…?

A terrifying, compelling, police procedural which will thrill fans of Angela Marsons, Peter James and Rachel Abbott.
My review of The Girls Next Door
I love reading crime and thrillers and was so very excited to read this first installment in the Detective Eden Berrisford series. This was also the first book I had read by author, Mel Sherratt. So, let me begin by sating that I really enjoyed this book. It is gritty, scarily realistic and is a dark tale that could happen to anyone's family. For me, this book was unputdownable, and I read it quickly, devouring the pages so that I would find out how all of the loose ends were tied up and who the killer was.
This book is incredibly dark and the opening chapter sets the pace and tone for the entire book. The story begins when a seventeen-year-old girl is murdered in a park. This particular scene is graphic and is traumatic in the sense that this kind of violent crime happens on a daily basis. The girl who is murdered could be your own daughter, a friend's daughter or indeed a the girl next door.
The story then catapults from there, and we read about various teenagers getting on with their lives and who become victims of crime. One teenager, Jess, who we learn more about during the course of the book and who finds herself in increasing trouble, I found particularly interesting, and was one of the few teenagers that I actually liked. The others, I have to admit,  I did like, mainly because that they were teenagers, acting as teenagers do.  They lied, were selfish and were generally not that nice to be around. But I did care about them, in a nurturing kind of way and wanted to steer them clear of trouble and to shout at them when they made stupid mistakes. A huge chunk of the story is about the mistakes that teenagers make and that at times they can be very cruel.
The one character that I did love was that of Detective Eden Berrisford, who just happens to be Jess's Auntie. This detective is sharp, witty and is mother to a teenage daughter. I loved her instantly for her job in a supposedly man's world, and because she was remarkably good a her job. Although blunt and practical, she also had a caring and warm side that shone through into her professional work. I found her immensely interesting and wondered how she would solve the mystery that was unfolding before my very eyes. What I also liked about this book was the way in which grief effects people and families in different ways. Grief can be turned inwards and become almost self destructive if allowed, and I liked the way in which grief and grieving for a child was dealt with by the author. We always imagine a wailing ad weeping mother who is weak and distraught, but this is not always the case. grief cannot be simply pigeon holed.
This book is dark, fast and deals with the darker side of human nature. that of self preservation, selfishness and the struggle to live in a society that is fixated on social image and 'selfies'. But this book also has heart, strong female characters and is ultimately hopeful. If you love your crime novels and police detectives who are different from the norm, then you will love this book. I most certainly did!
The Girls Next Door was published on October 27th by Bookouture.
With thanks to the publisher and NetGalley for a review copy.
Posted by jo at 05:00