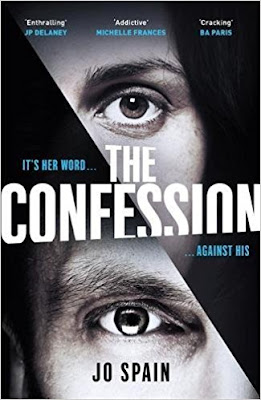 Late one night a man walks into the luxurious home of disgraced banker Harry McNamara and his wife Julie. The man launches an unspeakably brutal attack on Harry as a horror-struck Julie watches, frozen by fear.

Just an hour later the attacker, JP Carney, has handed himself in to the police. He confesses to beating Harry to death, but JP claims that the assault was not premeditated and that he didn't know the identity of his victim. With a man as notorious as Harry McNamara, the detectives cannot help wondering, was this really a random act of violence or is it linked to one of Harry's many sins: corruption, greed, betrayal?

This gripping psychological thriller will have you questioning, who - of Harry, Julie and JP - is really the guilty one? And is Carney's surrender driven by a guilty conscience or is his confession a calculated move in a deadly game?

THE MOST GRIPPING PSYCHOLOGICAL THRILLER OF 2018: PERFECT FOR FANS OF SWEET LITTLE LIES AND THE COUPLE NEXT DOOR.

My review of The Confession 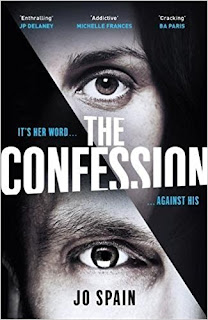 The Confession opens with one of the most gripping sentences I have ever read. This sentence both shocked and excited me,  and I just knew that I would love this book (and I did), The Confession is one treat of a book and I honestly could not pit it down.

From the very moment I read the book's blurb: "FIND OUT WHO DID IT ON THE VERY FIRST PAGE. ON THE LAST PAGE, FIND OUT WHY." I knew that I would be gripped.  It's such a clever and twisted read.

The story begins when a man walks into the home of Harry and Julie McNamara and viciously attacks Harry. Julie sits frozen in fear.  One hour later J P Carney hands himself into the police and confesses his crime. But instead of this being the end, it is only the beginning. We know who he is, but why did he do it?

As we progress through the book we learn about all three central characters,  past and present. Are Harry and Julie the innocent parties?  Who is guilty?  I found my loyalties constantly shifting as I learned more about what had happened and the reasons behind it.

Harry is a successful banker, but his life revolves around greed,  betrayal and ultimately corruption.  There is a murky undercurrent to his pristine lifestyle.  Julie is his devoted wife and we learn a great deal about her.  We hear her voice and I found myself drawn to her and her story, in her need to know more about the man who so visciously attacked her husband and his reasoning behind that action.  More importantly though, her search into who and why cones full circle back on herself.  Why did she do nothing as her husband was beaten to a pulp?  What does that say about her? This is why the book is so exciting.

Then we have JP, the attacker. I needed to know why he wanted to kill Harry. What was his motive? Jo Spain writes his back story so beautifully, that by the end we fully comprehend why he acted in the way he did. I found myself empathising with this man, which surprised me.

All three of these characters are linked together, and it is the police, a formidable Detective Alice Moody, who is relentless in her pursuit of the truth and who keeps on digging to find out why JP attacked Harry, even when they have his confession.

The Confession is an utterly gripping read. I read it while frantically turning the pages,  needing to know what had happened to JP, about Harry and Julie 's marriage, and if Harry was really an innocent victim. This really is a deliciously clever and breathtaking read. It's a stunning psychological thriller with an ending that will truly shock.

The Confession is published by Quercus on 25 Jan. 2018) and can be found on Amazon here.

With thanls to the publisher for the Advanced Reader Copy and for Anne Cater for inviting me on the blog tour.


Jo Spain's first novel, top ten bestseller With our Blessing, was one of seven finalists in the Richard and Judy Search for a Bestseller Competition 2015. It was named as an Irish Times crime fiction book of the year by Declan Burke. Beneath the Surface (2016) and Sleeping Beauties (2017), the second and third in the DI Tom Reynolds series followed, to further critical acclaim. Her standalone thriller, The Confession, will be released January 2018.

Jo is currently writing for TV.

A graduate of Trinity College Dublin, Jo lives in Dublin with her husband and their four young children. Jo previously worked as a policy advisor in the Irish parliament and as vice-chair of the business body InterTrade Ireland.

Jo’s debut novel is set against a background of the infamous Irish Magdalene Laundries and Mother and Baby homes. The author’s own father was born in one such home in Dublin and the novel’s backdrop was constructed based on the in-depth research she undertook while attempting to trace her family roots. 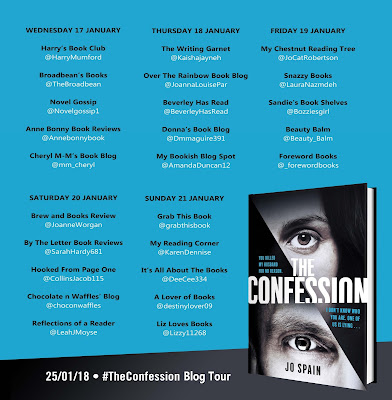