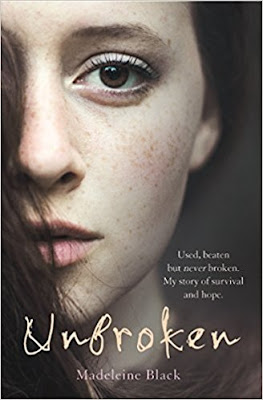 
For many years after that night, my memories of what happened after he held the blade to my throat and threatened my life were fragmented... difficult to piece together. It was too extreme, too violent for me to understand.

Violently gang-raped when she was thirteen years old, and raped three more times before the age of eighteen, Madeleine has experienced more trauma in her life than most ever will.
Living in a state of shock and self-loathing, it took her years of struggle to confront the buried memories of that first attack and begin to undo the damage it wrought, as men continued to take advantage of her fragility in the worst possible way.

Yet, after growing up with a burden no teenager should ever have to shoulder, she found the heart to carry out the best revenge plan of all: leading a fulfilling and happy life. But the road to piecing her life back together was long and painful. For Madeleine, forgiveness was the key. True forgiveness takes genuine effort. It takes a real desire to understand those who have done us so much harm. It is the ultimate act of courage.

In Unbroken, Madeleine tells her deeply moving and empowering story, as she discovers that life is about how a person chooses to recover from adversity. We are not defined by what knocks us down - we are defined by how we get back up. 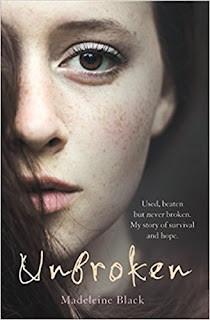 My review of Unbroken

Unbroken is Madeleine Black's real life account of being gang raped. This book is incredibly raw, honest and I have huge admiration for this author for being able to document so clearly her thoughts and feelings about this horrendous sexual assault when she was just thirteen-years-old.

This book pulls no punches and I'll be honest in saying that it was an incredibly difficult read. This was not due to how it is written, as the book flows beautifully and, I could clearly hear Madeleine's voice in my head. No, this book was difficult because of the subject matter. It tells the facts, the truth of what happened to this young girl, to the author, and the only way I could read it was by distancing myself, and telling myself that it was a story.

This book is gritty and it is only as we progress through the book that we learn about the true horror that Madeleine was subjected to by her attackers. At the beginning we get a few details of that specific night, told from the snippets that Madeleine can remember, but as we progress through the book, Madeleine sheds light on what happened and so the depiction of the rape is told, in no nonsense language. There is a warning placed before this part of the book, telling of how graphic it is, but that the editor thought it should be included. And I agree with this decision  that we hear her thoughts, feelings and what she went through should not be censored, as I feel that it is her right to voice what happened. It is our decision, as a reader, to decide whether or not to read this part of the book, and I'll be honest in saying that I did read theses pages, but that afterwards I needed to take a break for a few days. It was very distressing to read as I was fully aware that what I was reading had actually happened, that it wasn't fiction. But I feel that it was important to read this account so as to fully understand Madeleine's story.

It may sound strange when I say that this is a story of hope, but it really is. Madeleine writes with such honesty, beauty and bravery, as she looks back on what happened to her as a teenager. She is a survivor who surprisingly talks of forgiveness, and this brought me to tears.

Unbroken is such an empowering read. The Madeleine that  we read about today is a strong woman, a woman who has managed to rebuild her life and who now empowers other victims of sexual assault to speak out.  She has given these women a voice.

Unbroken was published by John Blake Publishing on 4 April 2017. It can be found on Amazon here.

With thanks to Anne Cater, Madeline Black  and the publisher for the paperback copy for review purposes.


The sharing of her story on The Forgiveness Project's website in September 2014, opened many doors for Madeleine in ways she never imagined and the invitations started to pour in.

She has taken part in both TV and radio interviews and has been invited to share her story at conferences, events and schools.

She recognises that she was a victim of a crime that left her silent for many years, but has now found her voice and intends to use it. Not just for her, but for so many who can’t find theirs yet.

She is married and lives in Glasgow with her husband, three daughters, her cat, Suki, and dog, Alfie.

Catch up with the blog tour... 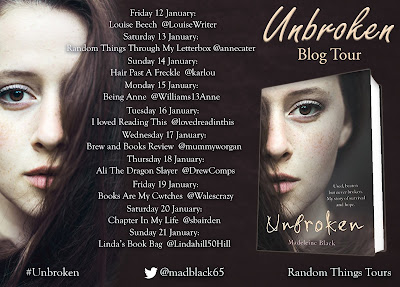