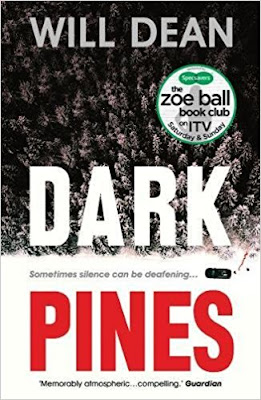 Tuva Moodyson, a deaf reporter on a small-time local paper, is looking for the story that could make her career.

A web of secrets. And an unsolved murder from twenty years ago.

Can Tuva outwit the killer before she becomes the final victim? She'd like to think so. But first she must face her demons and venture far into the deep, dark woods if she wants to stand any chance of getting the hell out of small-time Gavrik.


My review of Dark Pines 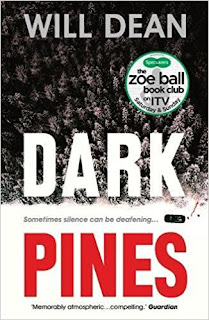 Oh this book! I absolutely loved Dark Pines. This is a Scandi-noir mystery that is set in the small community of Gavrik, told through the eyes of Tuva Moodyson, a young journalist who I found to be truly captivating on the page. She is ambitious, caring, dynamic, funny and just happens to be deaf. I warmed to her instantly. What a chsracter!

Tuva works for the town's local paper. Having worked and lived in London, she finds herself moving back to Sweden to be near her mother who is terminally ill. Tuva finds herself living in a community where she doesn't feel accepted, nor belong, as she is viewed very much as an outsider in this close knit and somewhat claustrophobic town. The same things happen day in day out. Everyone knows each others busineas, but when a body is found in the woods and with the eyes removed, Tuva begins to investigate.
Not only is she on the hunt for a killer, but she also has to deal with her own demons and venture into the pine woods to interview the inhabitants.

I found this book to be an incredible page turner. Within the first few pages I found myself immersed in the woods, with the Elks running wild alongside that feeling of desolation and sheer fear. After the first few lines I knew I would just love this book, and that I was reading something very special. The book is so incredibly descriptive and once I began to read I was instantly sucked into Gavrik life, and I too felt that cloying sense of oppression and the need to get the hell out of there.

This book works so well because of Tuva. She IS this book. Yes, the other characters are intriguing, funny, and also downright weird (you'll just love the  wood carving sisters, youre in for a treat), but this book is all about Tuva. Her need to succeed, to seek justice and truth, to get that big story that will  secure her fteedom. and that she can be a good daughter. She is one hell of a journalist and throughout the book I kept forgetting that she was deaf. I was reminded when Tuva spoke about putting her hearing aids in the cleaner over night, and the beeping that they made to warn her that the battery was low. But this is not who she is, she is not a deaf woman who is a journalist, she is a journalist who just happens to be deaf, and that's what's important  And oh, some of her internal thoughts when people made ill informed and judgmental comments about how she 'coped' with her deafness nearly made me choke on my coffee. Such clever and empathetic writing.

Ultimately this is a fantastic murder mystery set in the heart of the pine forest among the gunshots during Elk hunting season. Tuva believes that the present day murder is linked to the Medusa killings over  twenty years ago, but will the police believe her? I honestly couldn't decide who the killer was, and once I thought that I had it all figured out near to the end, it was a complete shock to find out I was completely wrong.

Dark Pines is also a story about family, forming relationships and that all important mother daughter bond. I found Tuva's relationship with her mother both warming and heartbreaking, all at the same time. But in general I read how difficult it was for Tuva to form any kind of relationship, and for me this was because I believed she viewed Gavrik as a temporary stop, both in her professional and personal life.

Dark Pines is such a haunting and evocative read. I felt so sad when I finished this book. I wanted to carry on reading. I'll miss the smell of pine trees. I'll miss the taste of sugar that floats in the air. But, most of all, I'll miss Tuva.

Dark Pines is available in ebook now and will be published in paperback by Point Blank on 14 June.

Dark Pines has also been selected as one of the ten books to be featured as part of the Zoe Ball Book Club.