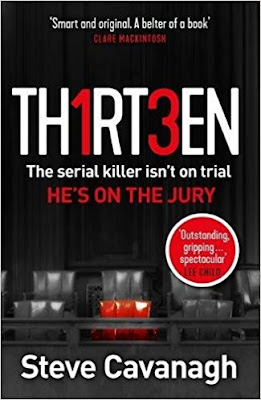 THE SERIAL KILLER ISN'T ON TRIAL.

'THIRTEEN is my favourite read of the year.' Sarah Pinborough

'Smart and original. This is a belter of a book.' Clare Mackintosh

'To your knowledge, is there anything that would preclude you from serving on this jury?'

Murder wasn't the hard part. It was just the start of the game.

Joshua Kane has been preparing for this moment his whole life. He's done it before. But this is the big one.

This is the murder trial of the century. And Kane has killed to get the best seat in the house.

But there's someone on his tail. Someone who suspects that the killer isn't the man on trial.

Kane knows time is running out - he just needs to get to the conviction without being discovered.


My review of Thirteen 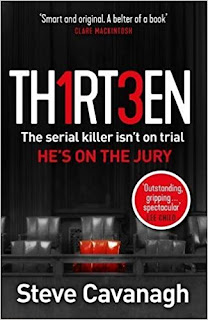 When I read 'THE SERIAL KILLER ISN'T ON TRIAL. HE'S ON THE JURY... I just HAD to read this book and I'm glad to say I was not disappointed. This is a book that most definitely lives up to its hook. I haven't read any other book by this author,but I now want to go back and read the previous books in the Eddie Flynn series. I love this character. This book is just brilliant! It's fast paced, twisty, entertaining and kkep me guessing until the very end. It's a fantastic read.

Eddie Flynn is a defence attorney with a colourful past as an ex con. The moment I met him, I liked him. He's that kind of guy. He fights for what he believes in and nothing, nor no one, will stop him. His marriage is in tatters and he takes on the role of defending Bobby Solomon, a Hollywood actor who is accused of murdering his wife and best friend. He believes that Bobby is innocent and against all the odds he fights for him.

This book features a wonderful range of characters. I loved Art Pryor, the colourful TV friendly lawyer who is fighting to prove Bobby's guilt. I couldn't help but smile at this man's antics. We then have the wise and world weary Harry Ford, the Judge who is Eddie's best friend, but who is also residing over this murder trial. The real star of the book for me though was Joshua Kane. He completely captivated me and made me question so many things. He is a terrifying, complex and compelling character who I won't easily forget.

This really is a serial killer legal thriller that I could not put down. There were so many occasions that I thought I was one step ahead, only to find that the author had pulled the rug our from under my feet. The writing is sharp, the narrative fast and with many twists and turns. I loved every minute of reading Thirteen.

With thanks to the publisher and NetGalley for the digital review copy.

Thirteen is available to download now as an ebook and is published in paperback on 14 June by Orion.
Posted by jo at 05:48