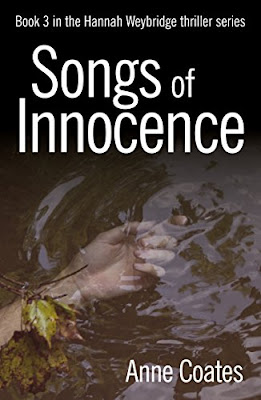 About Songs of Innocence

A woman's body is found in a lake. Is it a sad case of suicide or something more sinister? Hannah Weybridge, still reeling from her friend's horrific murder and the attempts on her own life, doesn't want to get involved, but reluctantly agrees to look into the matter for the family.

The past however still stalks her steps, and a hidden danger accompanies her every move.

The third in the bestselling Hannah Weybridge thriller series, Songs of Innocence provides Hannah with her toughest and deadliest assignment yet...


My review of Songs of Innocence 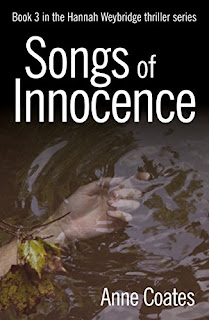 When you pick up an Anne Coates book you just know that you're in for a treat, and this book is no exception. Songs of Innocence is the third book in the Hannah Weybridge series and it is mighty good. I honestly could not put thus book down and read it in just over a day (which is fast for me). I really do think that you need to read the first two books in the series, so.as to gain a fuller sense of characters and past events, but it also works well as a standalone.

The novel is set in London and begins with the body of a girl being found in a city pond. At first the police believe it to be suicide, but are they right? As ever, journalist Hannah Weybridge gets drawn into events and starts to unearth the truth about this apparant suicide and the disappearance of Asian school girls. We follow Hannah as she begins her own investigation, alongside the police, as well as having to deal with her own personal problems.

I love this character so much. She is strong, she is sensitive, she is resourceful and she is a mother. I love her on so many different levels. We watch as she struggles to maintain that all important work life balance, while keeping herself safe from the consequences of past events ( you need to read the previous two books).  She is ultimately likeable as she does have flaws, but also a strong moral compass.

This book is also refreshing as it is set in the mid nineties. I loved the references to dialling up the internet. I remember this well, I could hear the ping and whirring as the internet connected, and this made me smile. I also love the fact that there are no smartphones in this book. No Google, and the fact that Hannah has to use the clippings library.

Songs of Innocence is full of wonderful characters, all of whom bring much enjoyment to reading this novel. I particularly found it interesting to read about Asian culture and arranged marriage, and found that the author tackled this subject with knowledge, empathy and compassion. There was much food for thought.

This really is a gripping thriller of a read. And, oh! that ending! I cannot wait to read the next exciting instalment and find out what Hannah gets up to next.

I purchased the Kindle edition of the book.

Songs of Innocence was published on 24 May by Urbane Publications.
Posted by jo at 05:55