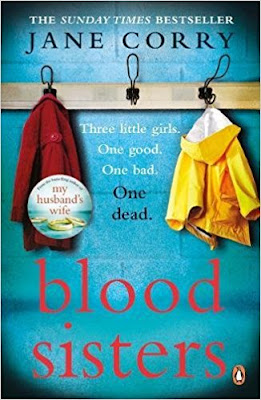 Three little girls set off to school one sunny May morning.
Within an hour, one of them is dead.
Fifteen years later, Alison and Kitty are living separate lives. Kitty lives in a care home. She can't speak, and she has no memory of the accident that put her here, or her life before it.
Art teacher Alison looks fine on the surface. But the surface is a lie. When a job in a prison comes up she decides to take it - this is her chance to finally make things right.
But someone is watching Kitty and Alison.
Someone who wants revenge for what happened that day.
And only another life will do...

My review of Blood Sisters


Blood Sisters is a thoroughly gripping, unsettling and entertaining read from Jane Corry. I read this book fairly quickly, as I was simply unable to put it down. I had to find out what had happened that fateful day and who was behind the present day act of revenge. The chapters are also short, which helped to propel me quickly through the book, from one cliffhanger to the next. Nothing is as it first seems with this book, it really is a clever read.

Blood Sisters is a novel of two stories. The story of before the accident in 1991 and the story fifteen years later. The novel flips backwards and forwards between the two with ease, there is no confusion as to what timeframe you are in. We are also given two different viewpoints, those of Kitty, and her stepsister, Alison.

Alison is an art teacher, who teaches an evening class. Her speciality is working with glass. It is while working at the college that she reads an advert, a job vacancy for an art teacher at the local prison. Alison takes the job, believing that she can make a difference, but this is the start of a harrowing journey that harks back to her past. I found Alison to be a complex, but likeable character. She is the good girl, the good sister, who carries the guilt with her in what happened 15 years ago. I couldn't help but pity her.

Kitty, on the other hand is portrayed as the bad sister, the girl who was spoilt, who was petty and self centred. She now lives in a care home, has a learning disability and is confined to a wheelchair, unable to communicate with others, although as a reader we are able to hear her innermost thoughts and feelings. She answers questions and states her feelings to us, the reader, with the other characters having to guess what she is trying to tell them. I found the portrayal of Kitty and her disability hugely refreshing.  Instead of focussing upon the disability, we focus on her, and this made a refreshing change. It was clear to me, that the author had either a personal understanding of individuals with disabilities and learning difference, or that she had conducted a lot of research. Either way, Kitty was hugely believable, as were the other residents living in the care home.

This is a slow burning psychological thriller to begin with, but the pace soon dramatically picks up through the energetic and complex plot, helped by the short chapters. I was constantly wondering who wanted to seek revenge for what had happened all those years ago. Who really was the good sister, and was what happened truly an accident? So many questions whirled around my mind as I raced to finish the book.

Blood Sisters is a novel about guilt, about the secrets we all hide and the bond that stepsisters share. It really is an enjoyable read.

Blood Sisters is published by Penguin on 29 June and is available to pre order on Amazon here.

With thanks to NetGalley and Penguin for the Advanced Reader Copy


Jane Corry is a writer and journalist who has written regularly for numerous newspapers and magazines including The Daily Telegraph Weekend section, the Mail on Sunday and Woman. She has spent time working as the writer-in-residence of a high security prison for men - an experience that helped inspire My Husband's Wife, her début thriller. 'I love twists and turns that keep the reader guessing until the very end! My husband says I'm a nightmare to watch dramas with as I love to work out who did it before the final revelation!'

Jane runs regular writing workshops and speaks at literary festivals all over the world, including The Women's Fiction Festival in Matera, Italy. Until her recent move to Devon, she was a tutor in creative writing at Oxford University. She is also an associate member of the Royal Literary Fund.

Many of Jane's ideas come during her morning dog-jog along the beach followed by a dip in her wetsuit. (She's an all-year-round swimmer provided the sea isn't dangerous.) Jane also loves tennis, walking, reading, yoga, the 'Quiet' train carriage (a great 'office' for writing) and her family. She's still coming to terms with being an empty-nester but makes up for it with lots of long-distance nagging! Jane's second husband was a bachelor family friend who is also Godfather to her children. He makes her laugh every day although they can't agree on how to load the dishwasher!
Posted by jo at 06:40