The Knowing by David Graham #bookreview 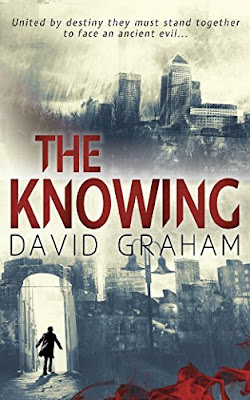 United by destiny, they must stand together to face an ancient evil.....

Ceri Edwards and two school friends lift the lid on an ancient book of recipes belonging to Betty Williams, a volunteer at the local hospital in Pontypridd, South Wales. Two Kansas City cops step off a flight at London Heathrow and one of them falls to the ground with a painful conviction that there's something evil in the air.

United in their destinies, Ceri and the police officers are drawn into a world where prophecies are pitted against invisible forces planning to raze London to the ground and bring down the Royal Family.

It all rests with Dai Williams, recently knighted MI5 agent and reluctant hero, to bring some order to the improbable events and to ensure that afternoon tea at The Ritz continues for another hundred years.

A great cross between Kim Newman and Ben Aaranovitch and a thrill for any fan of contemporary urban horror.


My review of The Knowing

The Knowing is a fabulous urban, horror thriller, that defies its genre. I actually thought that this book was more of a mystery/supernatural/science fiction type of a read... it is most certainly a genre busting book, and I loved it! I also didn't realise that this book follows on from The Screaming, but this book worked for me as a stand alone novel. I will, however, be reading The Screaming in the near future.

The Knowing is set in futuristic London, where Ceri Edwards from Pontypridd, South Wales and police officers from the States, have to fight against invisible forces who are wanting to destroy the country. The prologue sets the scene beautifully for the action to follow, and from that moment on the pace really doesn't let up. Mr Graham writes is such an easy and engaging way, with both humour and wit. Although set in a futuristic dystopian world, I understood completely the world in which these characters lived, as the author had constructed such an elaborate and detailed environment. The world in which they inhabit felt as real to me, as the world in which we live today.

The plot is a complicated and enjoyable one. I don't want to go into it in detail, as it will obviously give the game away, but all I will say is that the plot was well constructed and executed. Just imagine London as a corrupted city, with no mobile phones or internet, as this type of technology has been banned. It's a completely different world.

This book also worked for me because of the rich array of characters who each had their own unique story to tell. I enjoyed all of the characters in this novel, all had their own point of view and I felt like I got to know them.  My favourite character had to be Ceri, a young teenage witch, a quirky and likeable girl, who unleashes much mischief when she opens the book of ancient curses.  I found the way in which she spoke and acted incredibly authentic, just like that of a teenager learning about the world and how to fit into it. She really does have a rite of passage in this novel.

On paper, I really shouldn't have enjoyed this book, as I am not a big horror, urban fantasy reader... but this book, as I have already mentioned, defies being labelled, so if you are not a huge horror fan, do not be put off. This really is a gripping and enjoyable read. I couldn't put it down.

The Knowing, published by Urbane Publications on 30 Mar. 2017 is available to buy from Amazon here.


David Graham lives in an ostensibly carbon zero house in rural Kent with his partner and two cats amidst fields of maize and poly-tunnels of strawberries. Previously, he lived and worked in London as a consultant in the NHS. His previous non-fiction titles include: Medical Computing and Applications, Creative Sound and Computer-Assisted Medical Learning: Clinical Anatomy. David turned his attention to writing fiction in 2012. Since then, he has written one self-published novel (Looks Could Kill) and two traditionally published novels (Captive and Wet & Wild) under the name David Ellis. Looks Could Kill was in the Amazon Kindle Top 10 of spy thrillers and was downloaded more than 3,000 times. Captive was nominated for a Lambda Literary Award. He has also written two romance novellas under the name Richard Longfellow. His horror thriller The Screaming was published by Frostbite Publishing in the US in 2014, and by Austin Macauley in the UK in 2015. His new book The Knowing is the sequel to The Screaming and is due to be published early 2017 by Urbane Publications.