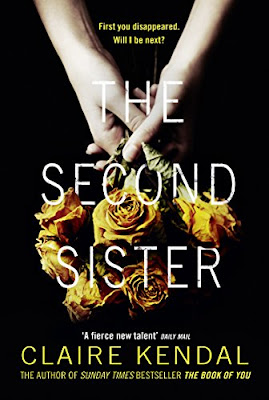 The chilling new psychological thriller from the author of the top ten bestseller, THE BOOK OF YOU, which was selected for Richard and Judy in 2015. Perfect for fans of THE GIRL ON THE TRAIN and DISCLAIMER.
It is ten years since Ella's sister Miranda disappeared without trace, leaving her young baby behind. Chilling new evidence links Miranda to the horrifying Jason Thorne, now in prison for murdering several women. Is it possible that Miranda knew him?
At thirty, Miranda’s age when she vanished, Ella looks uncannily like the sister she idolized. What holds Ella together is her love for her sister’s child and her work as a self-defence expert helping victims.
Haunted by the possibility that Thorne took Miranda, and driven by her nephew’s longing to know about his mother, Ella will do whatever it takes to uncover the truth – no matter how dangerous…


My review of The Second Sister

I was so very excited when I found out that Claire Kendal had a new book due out, as I had read The Book Of You many years ago and absolutely loved it. The good news is that I loved this book just as much. The Second Sister is a powerful and emotive read about the bond of sisters and the bonds of family.

The book is narrated by Ella, whose sister, Miranda, disappeared ten years ago, leaving a baby boy behind. Ella is now thirty, the same age that Miranda was when she went missing. The family have no answers and are effectively left in limbo as the police have no leads on where she went or what happened to her. The only suspicion that they had, was that Thorne, a serial murderer of women who is now locked up, could have taken her - but their investigation has led them to no answers.

Throughout the book we follow Ella on her journey to find out what happened to her sister. I really liked the fact that Ella speaks to her sister throughout the book, she is addressing her, not the reader, and although this seemed a little strange at first, I soon become used to it and understood why Ella spoke to her sister in this way. It was so very important that she did so, as it brought Miranda to life as well as highlighting the strong relationship that they had. I really liked Ella, a strong woman, a kickboxer, strong wiled and who wanted to protect all women. She is maternal, in her instincts to protect her sister's son, Luke, she was very much a mother figure to him.

The Second Sister really is about the strength of women, Many women in this novel have been victims of violent crime, perpetrated by men. Ella runs a charitable support group for such women, and provides practical help as well as emotional support. Her job is much more than a job, it is a vocation, and one in which she sees redemption for not being able to save her sister.

I have to admit that my most favourite character in the book was that of Ted. Ella's friend since their first day at school,  and on/off boyfriend. He really intrigued me, and throughout the book I really grew to love him and his fierce protectiveness of Ella. He had his faults, but I was able to forgive him as he was such a likeable character.

This book contains so many false leads, that I thought I knew who was responsible for Miranda's disappearance  serval times throughout the novel. The ending truly shocked me, and although slightly unbelievable, was enjoyable to read. The Second Sister is a fast paced and emotional read, about the bond that sisters shadre, no matter what happens to them.

The Second Sister is published by Harper Collins on 4 May 2017. You can buy a copy on Amazon here.


Claire Kendal was born in America and educated in England, where she has spent all of her adult life. Her first novel, THE BOOK OF YOU, was a Richard and Judy title and SUNDAY TIMES top ten bestseller. It has been translated into over twenty languages. Claire teaches English Literature and Creative Writing, and lives in the South West with her family. THE SECOND SISTER is her second novel.
Posted by jo at 05:00