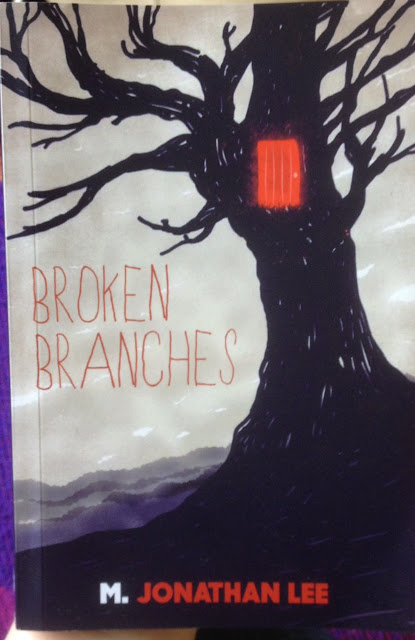 About Broken Branches
Family curses don't exist. Sure, some families seem to suffer more pain than others, but a curse? An actual curse? I don't think so.'

A family tragedy was the catalyst for Ian Perkins to return to the isolated cottage with his wife and young son. But now they are back, it seems yet more grief might befall the family.

There is still time to act, but that means Ian must face the uncomfortable truth about his past. And in doing so, he must uncover the truth behind the supposed family curse.


My review of Broken Branches

I shall start this review by writing that this book touched me deeply, it crawled under my skin and I still find myself thinking about Ian and his story. Broken Branches is an important book about menial health. The book is a tale about the importance of family, of a family's curse and of the bonds that are formed and broken within a family. It's an emotional read and it still has its claws in me.

Broken Branches is a difficult novel to review, in terms of giving the plot away. The novel begins with Ian and his wife, Rachel, returning to Cobweb Cottage with their young son, Harry. A family tragedy, involving Ian's older brother, Stuart, occurred in the cottage which then enabled them to return to the family home. Ian and Stuart had lived there as children, with their mum and dad. Ian and Rachel are filled with hope for a new life together in the country, but what unfolds is a story of grief, dealing with the past and your innermost demons.

This story is multi layered, it bounces backwards and forwards in time to when they first moved into the cottage and then to the present day. We read Ian's thoughts as he walks about the cottage, processing what has happened in the past and his life today. He is immersed in a life that he believes is powered by the family curse, stemming from his lost ancestors who lived in the cottage. The imagery and language that is used, imposes such a dark and sinister edge to this novel, that we believe Ian when he talks about the family curse and when he then begins to investigate if the curse is actually true. The cottage almost appears as a living and breathing dark force within the novel, making all who live in it captive. There is such an oppressive feeling to the cottage and its surroundings, including the large and looming tree, that is ever present.

I particularly liked the passages where Ian was alone in his study working. He is a website editor and freelance writer. So the den under the house is where he sits and writes, and it is also where his music collection is housed. During the course of the book he begins to do less work and focusses instead on learning about his family history and the family curse. The music that is used as a soundtrack to Ian's story is also very clever. I smiled when he chose Pearl Jam's Vitalogy album, (I still love the song Better Man), as it remanded him of his student days. I thought to myself that we must be of a similar age, as I too played this when living in student digs.

Nothing is quite as it seems in this book, and I was never too sure if Ian was telling the truth, or if his mind was playing tricks on him. Is he a reliable narrator, or is he suffering from a mental breakdown? It wasn't until the very end, that the truth was revealed, and I am still reeling from the revelation now. I closed the book once I had read the final sentence and just had to sit and think for a little while. It had such a profound effect upon me.

Broken Branches is a dark read, focussing upon mental health issues and the subject of depression. Both of which are tackled sensitively and with dignity. Depression and suicide are still viewed as taboo subjects, but book's such as this push those boundaries and open up a dialogue. It is for this reason that I feel that this book is very special. Not only is it a fantastic spooky tale with much depth, but it also tackles those psychological issues that nobody really want to talk about. It tackles those issues head on, and for that I praise the author. Broken Branches really is an important and compelling read.


With thanks to Hideaway Fall for providing a paperback copy for review purposes.

Broken Branches is published by Hideaway Fall on 27 July 2017 and is available to pre order form Amazon here.


M. Jonathan Lee (also known as Jonathan Lee) was born in 1974. He is an award-winning novelist who has had two novels in the #10 Amazon charts. He was born in Yorkshire, northern England where he still lives today.

His first novel, the critically-acclaimed The Radio was shortlisted for The Novel Prize 2012 and is the first in the loosely titled The 'The' trilogy. His second novel, The Page (the second in The 'The' trilogy) was released in January 2015.

His third novel A Tiny Feeling of Fear was released in September 2015. It has been hailed as 'original and inspiring' by Sunday Times best-selling author, Milly Johnson.

He is working closely with Rethink and Mind Charities to raise awareness of mental health issues, and is a regular commentator on the BBC.

He signed a four-book deal in February 2015 and is currently writing a non-fiction rock biography about Boston-based band Hallelujah the Hills. He is also writing three further fiction titles, the first of which is to be released in late 2017.

His fourth novel, Broken Branches is due out in July 2017, published by Hideaway Fall.

He is happy to talk to anyone...