Gone Without a Trace by Mary Torjussen 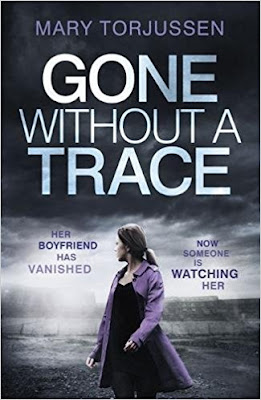 About Gone Without a Trace


No one ever disappears completely...
You leave for work one morning.
Another day in your normal life.
Until you come home to discover that your boyfriend has gone.
His belongings have disappeared.
He hasn't been at work for weeks.
It's as if he never existed.
But that's not possible, is it?
And there is worse still to come.
Because just as you are searching for him
someone is also watching you.

My review of Gone Without a Trace

Gone Without a Trace is a psychological thriller set in the Wirral, Merseyside. I was initially drawn to this book because I grew up on the Wirral (and still have family there), plus the fact that I was fascinated by the notion that a person, a loved one, could just disappear without a trace. I wanted to know what had happened and why. This book delivered on both counts, but I'll admit that I found it an uncomfortable read.

So, the story begins when Hannah returns home from a successful work conference, wanting to celebrate with her boyfriend, Matt, but she finds that he has gone. He has taken everything that was his, leaving no trace of him, or his personality behind. He has also erased all social media accounts and his contact number from Hannah's phone. She has no way of contacting him. This sent a chill down my spine. The fact that a person could do this, that it was possible to do this, and that your normal, everyday happy existence could be obliterated, just like that.

The characters in this novel are a complex bunch and I didn't really like any of them, but having said that, I think that this was intentional. I could be subjective, watching as an outsider. I even felt like I was watching Hannah from a distance, but in doing so I was able to take a step back and see the bigger picture. I honestly feel that I wasn't meant to get close to her.

As I have already mentioned, this is an uncomfortable read, which became even more uncomfortable after the dramatic plot twist that I honestly didn't see coming. A difficult and taboo subject is raised, and I applaud the author for her bravery in writing about such a sensitive subject. What I also liked was the fact that this novel is very much two stories. The story before and after the plot twist. It very much felt like I was reading two very different stories, but for very obvious reasons. This was a brave thing to do, but for me, it worked.

This is a slow novel to begin with, but an all consuming one all the same. The pace only really picks up about three quarters of the way through, but then there really is no letting up, as we face surprise after surprise. It's almost as if I was lulled into a false sense of security.

Gone Without a Trace is a dark and challenging book, and most definitely lives up to its psychological thriller status. The ending truly shocked me, and I still find myself thinking about Hannah and Matt. This is a hugely enjoyable read that will keep you guessing until the very end.

Gone Without a Trace, published by Headline on 23 Mar 2017 can be bought via Amazon here.

With thanks to the publisher and Bookbridgr, for my paperback copy, for review purposes.