Secrets of the Dead by Carol Wyer #bookreview 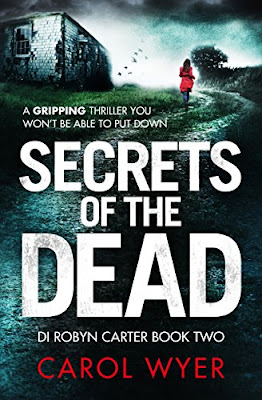 About Secrets of the Dead
Colourful, plastic boats were scattered in puddles on the floor. In the bathtub lay Linda Upton, fully-clothed, lips a shade of blue, and bloodshot eyes wide open.

When a young mother is found drowned in the bath, clutching a receipt saying ‘all debts paid’, Detective Robyn Carter knows it’s just the beginning of a harrowing case. She recognises the signs of a serial killer, and when a second victim with a receipt is found, her worst fears are confirmed.

With the local press whipping the public into a frenzy, Robyn is under pressure to solve the crime yesterday. But her team can’t find a link between the two bodies, and the cracks are starting to show.

Just when her leads have dried up, Robyn discovers an unsettling clue she thinks could unlock the case. But as she chases across the plush carpets and manicured lawns of the wealthy elite, honing in on the killer’s shocking motive, one of her own is put in terrible danger.

Can Robyn stop the most twisted killer of her career before it’s too late?

My review of Secrets of the Dead

Secrets of the Dead is the second installment in the Detective Robyn Carter series. I read the first novel, Little Girl Lost, late last year and really enjoyed it. I was therefore really looking forward to reading Secrets of the Dead and this novel didn't disappoint. This is an engaging, psychological crime thriller with many interesting characters and one twisted killer.

The story begins when the manager of a hotel spa is found dead in the sauna room. His body is burned beyond all recognition and his cause of death is believed to be that of a heart attack and an unfortunate accident. The case is closed, but when Robyn meets a woman who knew the deceased man, and who believes that his death was no accident, then Robyn also begins to have doubts and starts her own mini investigation. What follows is a series of gruesome murders, all with 'debts paid' notes left at the scene. But, what connects the murders and who is responsible?

Robyn is a woman with a tragic past, a woman who lost her partner and unborn baby and who lives with this buried pain and guilt. Her past is what shapes her into the strong and determined woman that we see on the page. She is fiercely independent and will fight for justice and what she believes is the 'right thing' mo matter what the consequences. It is Robyn who fuels these novels. I found myself drawn to her, wondering what she was thinking and what her next move would be. It is so refreshing to read about a strong woman, in a professional role, who is also vulnerable. Robyn answers to no one but herself, and I love her for it.

I must also mention Robyn's cousin Ross, the private detective, as he is also one of my other favourite characters. In a way, he is the complete opposite of Robyn. He is happily married, wears his heart on his sleeve and is happy to play the bumbling fool to get a job done. I don't know why but he does remind me a little of Lieutenant Columbo. I really do have a soft spot for Ross, and without his help, and his wife's, Robyn would have a more difficult time in solving the case.

The plot for Secrets of the Dead is a complicated one, but one that is also easy to follow. We read differing viewpoints,  as well as those from the unknown murderer, that help to shape the plot and give meaning to what is happening and why. There are a lot of murders in this book, all poignant, but one in particular I found unsettling. This is where the young mother is found dead in her bathtub, surrounded by plastic boats. I had to take a little time out after reading that scene, before I could carry on.

The question I kept asking myself was why this person was doing what they did? The answer truly surprised me in its plausibility and I realised I had completely misunderstood the motive. I really was shocked by the ending, but in a good way. This is what makes the novel truly remarkable, nothing is as simple as it seems.

Secrets of the Dead is a gripping, imaginative and compelling read for those who love psychological crime thrillers. I enjoyed this book immensely and look forward to reading the next case that Robyn Carter will solve.

With thanks to NetGalley and Bookouture for the Advanced Reader Copy

Secrets of the Dead is published by Bookouture on May 30 and is available to order from Amazon here.

Carol E. Wyer is an award-winning author whose humorous books take a light-hearted look at getting older and encourage others to age disgracefully. More recently she has chosen to write for the "dark side" and embarked on a series of thrillers, starting with the gripping best-seller, Little Girl Lost.
Her book Grumpy Old Menopause won The People's Book Prize Award for non-fiction 2015.
Carol has been interviewed on numerous radio shows discussing 'Irritable Male Syndrome' and 'Ageing Disgracefully' and on BBC Breakfast television. She has had articles published in national magazines 'Woman's Weekly' featured in 'Take A Break', 'Choice', 'Yours' and 'Woman's Own' magazines and writes regularly for The Huffington Post.
Carol is a signed author with Bookouture and Delancey Press.

To learn more about Carol, go to www.carolewyer.co.uk or follow Carol on Twitter: @carolewyer. Carol blogs at www.facing50withhumour.com and www.grumpyoldmenopause.com