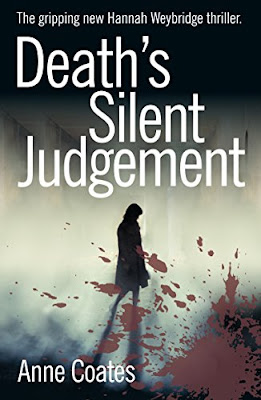 
Death's Silent Judgement is the thrilling sequel to Dancers in the Wind, and continues the gripping series starring London-based investigative journalist Hannah Weybridge.

Following the deadly events of Dancers in the Wind, freelance journalist and single mother Hannah Weybridge is thrown into the heart of a horrific murder investigation when a friend, Liz Rayman, is found with her throat slashed at her dental practice.

With few clues to the apparently motiveless crime Hannah throws herself into discovering the reason for her friend's brutal murder, and is determined to unmask the killer. But before long Hannah's investigations place her in mortal danger, her hunt for the truth placing her in the path of a remorseless killer...

The series is very much in the best traditions of British women crime writers such as Lynda La Plante and Martina Cole.


My review of Death's Silent Judgement


Death's Silent Judgement is the second instalment in the Hanmah Weybridge crime series by Anne Coats, the first book being Dancers in the Wind which I read and very much enjoyed. I couldn't wait to read the continuing saga of Hannah's  ever complicated life, and this book didn't disappoint. It's a fantastic read.

Death's Silent Judgement is set in 1994, and tackles some serious and disturbing issues. The story begins with the murder of Hannah's long term friend, Liz, a dentist who was providing free dental care for the homeless in the area. Hannah had agreed to meet her at her dental clinic, based at the local church, but instead stumbles upon a bloody murder scene, her friend's throat slashed. It is assumed that a homeless patient is responsible for her murder, but Hannah does not believe this to be true, and once contacted by Liz's mother, Lady Rayman, she begins her own investigation to find out what happened to her friend. As  an investigative journalist on retainer with The News, she begins to investigate and it is this investigation that leads Hannah to unearth hidden secrets from Liz's former life, while working as an aid worker in Somalia.

I don't want to give the game away in terms of plot, or the subject matter that is discussed in this book, as it is all interlinked with Liz's death. But I will just say that the author has obviously done much research on the subject and tackles this particular storyline with tact and empathy. The author also does the sane with regards to the homeless community in the novel. It would be very easy to write in a stereotypical manner, but these characters are vividly brought to life, their circumstances realistic and once again their stories are told with great empathy.

This is a story which grabbed my attention from the very beginning. I was thrown into a world of corruption, where those with money have the power. Hannah is a resourceful and strong woman, fighting for justice, with the need to find out who killed her friend. Although much of the subject matter was uncomfortable to read, this was a fascinating and enjoyable book. I had no idea what the outcome would be. The real joy gained by reading this book, is from walking side by side with Hannah as she slowly digs her way to the truth. She is such an interesting character, and because I believe in her, I believe in the story.

I will just mention that although this book can work as a stand alone novel, I do think it is best read after Dancers in the Wind. Many of the characters reappear in this novel and I think you get a richer reading experience when you already know them. I do hope that there are more books to follow in this series, as I believe that there is a lot more for us to discover about Hannah.

Death's Final Judgement is a hugely enjoyable read. Hannah Weybridge is fast becoming one of my favourite literally characters.

Death's Silent Judgement, published on May 11 by Urbane Publications can be found on Amazon here.


For most of her working life in publishing, Anne has had a foot in both camps as a writer and an editor, moving from book publishing to magazines and then freelancing in both. Having edited both fiction and narrative non-fiction, Anne has also had short stories published in a variety of magazines including Bella and Candis and is the author of seven non-fiction books. Born in Clapham, Anne returned to London after graduating and has remained there ever since. In an attempt to climb out of her comfort zone, Anne has twice "trod the boards" - as Prince Bourgrelas in Ubu Roi when a student and more recently as a nun in a local murder mystery production. She also sings periodically in a local church choir and is relieved when she begins and finishes at the same time - though not necessarily on the same note - as everyone else. Needless to say, Anne will not be giving up her day job as an editor and writer. Telling stories is Anne's first love and nearly all her short fiction and novels begin with a real event followed by a "what if ..." That is also the case with the two prize-winning 99Fiction.net stories: Codewords and Eternal Love.
Posted by jo at 05:00