The Comfort of Others by Kay Langdale #bookreview 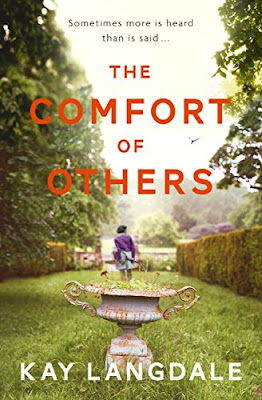 About The Comfort of Others

Minnie and her sister Clara, spinsters both, live in a dilapidated country house in the middle of a housing estate, built when their father sold off the family's land. Now in their seventies, their days follow a well-established routine: long gone are the garden parties, the tennis lessons and their suffocatingly strict mother. Gone, too, is any mention of what happened when Minnie was sixteen, and the secret the family buried in the grounds of their estate.
Directly opposite them lives Max, an 11-year-old whose life with his mum has changed beyond recognition since her new boyfriend arrived. Cast aside, he takes solace in Minnie's careful routine, observed through his bedroom window.
Over the course of the summer, both begin to tell their stories: Max through a Dictaphone, Minnie through a diary. As their tales intertwine, ghosts are put to rest and challenges faced, in a story that is as dark as it is uplifting.


My review of The Comfort of Others

The Comfort of Others is a novel about friendship, family and living with secrets that are too painful to reveal.  I loved this novel for its gentleness, its honesty and for its poignancy. This is such a beautiful book. It is both heartbreaking and uplifting at the same time.

The novel is told from the viewpoints of two central characters. Max is an eleven-year-old boy who lives with his mother in a terraced house on a council estate. Opposite where he lives stands Rosemount House, where two elderly ladies live, Minnie and her sister, Clara. The house once stood alone in he middle of sprawling fields, but their father decided to sell the land and to build houses for the workers.

The story begins with Max. He wants to be an author, but because his writing skills aren't that great, he decides to use his mother's old Dictaphone to tell his story. The story he tells is of life with his mother and her new boyfriend. He feels unwanted, cast aside, and so his oral journal becomes his coping mechanism. It is this decision, that has a direct and positive impact upon Minnie. She watches the little boy from the comfort of her living room, she sees him speaking into his Dictaphone, and from doing so gets the idea that she too, could perhaps write a diary and tell the story of her own life. Although they have never met, just merely seen each other when sitting in their own homes across the wide road from each other,  they begin to share a bond, a common understanding, and their two stories inevitably become one.
I found these characters hugely engaging. It was lovely to hear personal stories from both ends of the age spectrum. Max's voice was particularly strong and very much that of a young boy. The dialogue was clever and I believed what Max had to tell me. I felt for him, a little boy who simply wanted to be seen, heard and valued. For me though, it was Minnie who won my heart. Here is a woman who has lived a secret life, a life that cannot be seen on the lines of her face, or in her actions. It is through Max's strength in starting his own journal, that Minnie draws the strength to examine her own past. Minnie is the kind of woman I would dearly love to have a cup of tea and a slice of cake with, while putting the world to rights.
This really is such a beautiful story. It is seeped in sadness, a somewhat bittersweet story that had me sobbing in parts, but ultimately it is a story of strength and of dealing with the hardships of life. This is true for both characters, young and old. One particular scene concerning Minnie I found to be very upsetting, but it was pivotal to the plot, the novel centred on this moment in time, it made Minnie the woman she became.
I adored this novel. In a world were many books are fast paced, it was lovely to simply sit and read this book at its natural, gentle pace. The Comfort of Others, truly is a delightful and very special book.
The Comfort of Others, published by Hodder Paperbacks on 6 April 2017, can be found on Amazon here.

Kay Langdale is the author of five novels: AWAY FROM YOU, CHOOSE ME, HER GIANT OCTOPUS MOMENT, WHAT THE HEART KNOWS (Rowolht, Germany) and REDEMPTION (Transita, published as If Not Love by Thomas Dunne Books, St. Martin's Press). Visit Kay's website at www.kaylangdale.com. Follow her on Twitter:@kaylangdale.
Posted by jo at 05:00

Email ThisBlogThis!Share to TwitterShare to FacebookShare to Pinterest
Labels: Hodder & Stoughton, Kay Langdale, The Comfort of Others