Accidental Damage by Alice May #bookreview 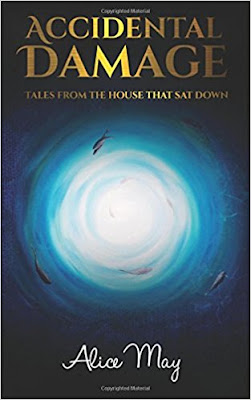 
If you think the normal school run on a Monday is entertaining you should try doing it from a tent in your back garden surrounded by the jumbled up contents of your entire home. It is vastly more diverting. Our heroine has survived the sudden collapse of her home - or has she? Certain events two and a half years ago led her to deliberately destroy an important piece of herself, hiding away all remaining evidence that it ever existed. What happens when she decides to go looking for it? Does she really deserve to be whole again? Inspired by a true story, this is an account of one woman’s secret guilt and her journey in search of forgiveness!


My review of Accidental Damage

When I first stumbled across Accidental Damage, I was first intrigued by its beautiful cover, and then by the fact that it was based upon a real life event. What would I do if my house suddenly started to crumble down around me? To be honest, I have absolutely no idea. But for the author, Alice May, she knew exactly what to do, and this is her powerful and immensely personal  story.

Accidental Damage is told in first person narrative by the Heroine, who we are introduced to by the omniscient narrator. I loved the fact that the Heroine spoke directly to me. There is no fourth wall in this book. I followed her thoughts and feelings from when she noticed the very first cracks in the house, right through to the end of her wonderful tale. I actually felt like I knew her, she had become a fictional best friend.

The book is divided into what happened in the past, regarding the crumbling house, and the present day, ll told from Heroine's point of view. Each chapter clearly stated if it was the past or present, and each was given an explanatory title, which I loved. What this enabled me as a reader to do, was to easily follow the narrative. I always knew if I was reading about the present or past Heroine.

This is a gripping story, and one which I wouldn't have believed could happen, if it were not for the fact that it was based on real life events. I couldn't imagine living in a tent in the garden, not knowing if I would ever have the funds to rebuild my home. What most surprised me though, was how uplifting this book was. It was not a depressing read, but rather one about just getting on with life, and making the most of your situation. I found the story hugely inspiring.

I must also mention the fact that this novel heavily revolves around art and painting. Heroine is a painter, and it was very obvious that painting for her was as important as breathing. She simply had to paint, in order to live, but this was something that was incredibly difficult to do with her home crumbling down around her, and her thoughts around this subject I found very moving and insightful.

I did have a few niggles with this book, but they didn't distract me from enjoying the story. The first is how the book is formatted (I read the paperback version, so the kindle version may be different) but there were huge breaks between paragraphs, which distracted me at first, but which I quickly got used to. The second was that the characters within the story were not given names, but were referred to by their qualities, such as 'Chaos' and 'Beloved Husband'. For me this narrative technique made the characters seem somewhat distant, almost less real, apart from the Heroine of the story, as  I got into her head, I understood completely what she was going through. But, for me the rest of the family felt less real, and for me this was a shame. Perhaps I will get to know more about them in the second book which is going to be released soon.

Accidental Damage is a gripping and enjoyable read about the importance of family, the strength of women and that women will do everything in their power to protect their family. It's a thought provoking read and makes you question what is really important in life.

My thanks to the author who provided a copy for review purposes.

Accidental Damage is available to buy from Amazon here.


Alice May is a multi-tasking mother with four not-so-small children and she is fortunate enough to be married to (probably) the most patient man on the planet. They live in, what used to be, a ramshackle old cottage in the country. Her conservatory is always festooned with wet washing and her kitchen full of cake.

Following many years exhibiting as a mixed media artist, Alice decided that 2016 was the year she would write her first fictional novel. ‘Accidental Damage – Tales from the house that sat down’ simply wouldn’t leave her alone until it was written.
Posted by jo at 05:00