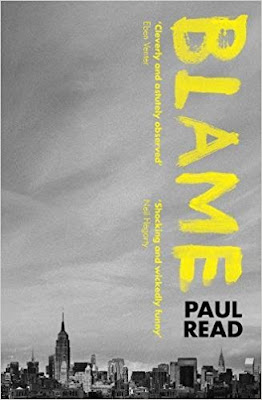 
It is the summer of 1989 when Lucas witnesses an event that will tear his family apart. Over a decade later, his estranged father succumbs to a suspected heart attack.

Lucas shuns grief and escapes to New York with his colleague Mariana. However, a dark secret from his past threatens to re-emerge and destroy the burgeoning relationship before it has even begun.
When his father's girlfriend fails to reappear after reporting his death, the true cause of his demise falls under scrutiny. And as the startling truth comes to light, Lucas must confront the fact that father and son may not have been so different after all.


My review of Blame
Blame is a story about family, about trust and about learning from your past to shape your future. It is a book about finding yourself and who you are. I found this book both challenging and rewarding in equal measure, it really was a fascinating read. This is the first book I have read by Paul Read and I immediately liked his writing style, his use of phrasing, that was almost poetic. Although the subject matter is difficult, the book is surprisingly easy to read. The text flows, in a fast paced journey that takes us through Lucas's life, explaining who he was and who he is today.
The novel opens with a Prologue, that jettisons us into the future, ten years on from the present day story, which is that of Lucas coming to terms with his father's death after an apparent heart attack. The Prologue asked many questions and set up the story beautifully, leaving the reader with a griping cliff hanger. The pace doesn't slow down much from this moment onwards. We meet present-day Lucas, an intelligent man, a successful research chemist, but a man who also has self destructive tendencies, all of which can be explained by his past and what happened during the summer of 1989. Read writes with great skill, in his portrayal of this character. He is not particularly likeable, and he has his faults, but ultimately he is hugely interesting, he piqued my interest and I wanted to learn about what happened to him, as I wanted to understand the man he had become.

We learn of the past via Lucas's diary entries, that he wrote as an eleven-year-old back in 1989. I loved the natural feel of the writing, the typos and clumsy way of writing, but it was so subtle, so believable, that I actually believed I was reading an authentic diary written by a child. These diary passages gripped me, the thirst to know what had happened between Lucas and his father, and the reason for his mother's almost distant behaviour and lack of motherly concern. I also loved the descriptions, both past and present of his brother, Ryan. The bond between them was so palpable on the page, the dialogue so natural with that mixture of both love and hate. I found their relationship fascinating. Marianna, was also an intriguing character. Originally from America, and a computer nerd, I found her both refreshing and very likeable, and couldn't for the life of me figure out what she saw in Lucas.

Blame is very much a story based upon several mysteries; the mystery of how Lucas's father died and the mystery of what happened in 1989. This is a raw and honest portrayal of family life that both shocks and entertains at the same time. What this book ultimately asks is that of: Can we ever really change? Are we a product of our past? Does your past and upbringing truly define us? I loved everything about this book. It captivated me from start to finish, and the story of Lucas will stay with me for a very long time.

Blame is published on April 15 by Legend Press. You can find a copy on Amazon here.

With thanks to NetGalley and Legend Press for the Advanced Reader Copy.

Paul Read has taught at several inner city schools as an Art and English teacher, both in England and Italy, where he currently lives with his partner and two children. He received a distinction in creative writing for his MA at City University London and has been a bookseller, ice cream van driver and a voice-over artist in his time.
The Art Teacher and Blame are both published by Legend Press.