Marching on Together by PJ Whiteley 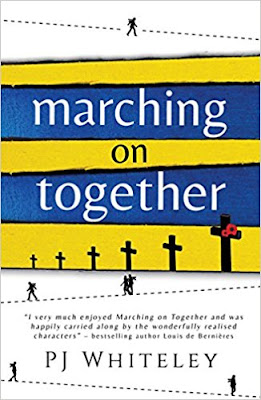 About Marching on Together

It is August 2014. Six Leeds United supporters set off for a short break in Bruges. Two brothers Allan and Johnny Collins - the former a successful businessman, the latter just out of prison - are visiting great-grandad's grave on the Western Front, at the time of the centenary of the start of the Great War. They're joined by Johnny's mates, Craig and Terry; the tomboy Petra; and the out-of-sorts Yvonne, who failed to persuade estranged husband Tony to accompany her. For all the political events, historic and current, that surround them, they find it difficult to avoid discussion of the wildly eccentric new owner of their beloved football club as it languishes in the second tier of English football. He has sold the best striker and banned the Number 17 shirt as being 'unlucky'. Meanwhile other obsessions, secrets and ambitions lie within their hearts. Can Johnny find love again, or a job? Will Terry make it as a photographer? Is Allan's business as successful as it appears to be? What is the family secret behind the antique silver locket that Yvonne keeps in her handbag? And can she finally accept the result of the 1975 European Cup Final, and begin to move on with her life?

My review of Marching on Together

I'll start by saying that I do not watch, nor love anything to do with football, so, on paper, this should not be a book that I would enjoy... But... I loved this book. So don't let the idea of reading a 'football themed' book put you off. Marching on Together is more than the Leeds United theme, it really is so much more than football. It's about family, friendship, loyalty and an epic journey to France! I probably did miss many of the football related references, but you know, that's okay. It didn't distract me from the enjoyment of this book one little bit.

Marching on Together is a gentle and cathartic read. It is a book to be read slowly, so that you fully embrace the many characters in the book and what they are going through. This is also a book that is incredibly difficult to review, without giving any of plot away. So, I will focus on what I enjoyed about this book, rather than the plot.

The book worked for me because it is a tale of six individual characters, six individual stories, that although are separate, are also connected through the running theme and love of football, friendship and family. It is their stories that we follow, all unique, all touching, and all completely absorbing. So, while reading Marching on Together I experienced what they were thinking and feeling. This is also a huge feat to pull off for any author, as every character had their own distinctive voice. Not once did  I become confused as to whom was speaking to me. More importantly I actually felt like I was on the journey with them, that I was part of their group, that I was their friend. I was included.

The journey, both in the literal and literary sense, is a right of passage for each and everyone of them, and they all change because of it. It is also very hard for me to pick a favourite, for me to identify with solely one of these fabulous characters, but If I had to chose it would be Johnny and Petra. Johnny I felt immense empathy towards, a man who gets out of prison and is just trying to do his absolute best. I admired him greatly. Petra was also a hugely likeable character, a woman in a male dominated world who has a strong voice and presence.

Marching on Together is really a book about friendships, old and new, and that anything can be accomplished by marching on together. I enjoyed this book immensely and highly recommend it for those who wish to read a more gentle style of book that focusses on human nature, conversation and how we all interact with each other. I look forward to reading more books by this author.

With thanks to the publisher and NetGalley who provided me with an Advanced Reader Copy.

Marching on Together, published by Urbane Publications on February 23, can be found on Amazon here.

PJ Whiteley, who writes non-fiction as Philip Whiteley, is an experienced author, principally about management. He has written extensively about how low wages are bad for business, as part of a bid to try to convince economists that society consists of people. PJ Whiteley's boyhood ambition was to represent Yorkshire Cricket Club. He gave up playing as an amateur a few years ago when facing the quicker bowlers became a bit too tricky, but still plays five-a-side football. He works from home full time as an author and is married to a sex therapist, so things could have turned out worse.
Posted by jo at 05:00