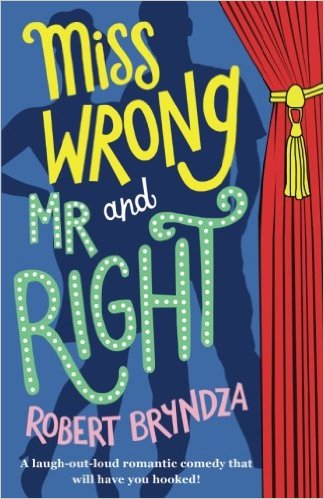 About Miss Wrong and Mister Right

‘I found myself smiling continually… will have you laughing your head off…an excellent romantic comedy.’ Rachel’s Random Reads

‘This is men,’ said Gran. ‘When they vant you, but you don’t vant them, they stay. But let them know you vant them, they no longer need you, and they go! It’s like that movie, Nanny McPhee.’

Natalie Love has worked hard to have it all. She runs a successful London theatre that's about to host one of Hollywood's leading stars, Ryan Harrison. She’s pretty sure she’s found her man in yoga boyfriend Benjamin, despite his annoying habit of saying Namaste! every time he speaks. And her eccentric, glamorous Gran is always on hand to offer sage advice and steaming bowls of goulash. Life in the bright lights of London has always been Natalie's escape from her chaotic country family in rural Devon and Jamie, the childhood sweetheart she left at the altar fifteen years ago. Until he turns up at her theatre door... Jamie is in town producing a West End show and with rivalry suddenly clouding old feelings, this isn’t quite the reunion Natalie was expecting. Will Benjamin prove to be Natalie’s perfect match? With Ryan turning her head, Natalie is more confused than ever. And what about Jamie – could he be her second chance at first love?

Charming, hilarious and totally unputdownable, Miss Wrong and Mr Right will put a huge smile on your face and keep you guessing who Natalie’s ‘Mr Right’ is until the very last page.


My review of Miss Wrong and Mister Right

I shall start by saying that Romantic Comedy is not my preferred genre of reading, but, I wanted to give this book a go, as I had heard so many wonderful things about this author, and I have several of his crime books on my TBR pile. Well, I really enjoyed this book, and it did make me laugh, something that a lot of RomComs fail to do.

So the book begins when Natalie leaves her fiancé, Jamie, at the altar. The reason she gives is that they are too young, and she doesn't want to be trapped in the village for the rest of her life. She does love Jamie, but she wants to live her life before settling down. Everything seems to have happened far too quickly. This I could fully understand. So, fast forward fifteen years and Natalie has a successful career in London's West End. She believes that she has now got her life all sorted out, but how wrong could she be? She begins to question her relationship with her boyfriend, Benjamin, and then when Jamie shows back up in her life, he complicates matters even more.

This book does differ to many books in this genre, as it has depth and characters that we can relate to. Very often I read RomComs with shallow characters, who are only concerned with their looks and are incredibly superficial, whereas this book is the polar opposite. Natalie is a character that I liked from the very first page. With her frizzy hair and carefree attitude, how could I not like her? She is a woman who has ambition and more importantly, knows her own mind.

I loved all of the characters in this book. We have the Slovak gran, who was hugely entertaining and completely authentic. The character who I truly loved though was Jamie, the boy next door who had 'done good' and 'gone far.' My heart truly ached for him at having lost the love of his life.

Miss Wrong and Mister Right  is a hugely enjoyable read and a lovely way to escape the gritty realities of every day life. I guessed the ending, but this didn't really matter, in a way I felt that I was meant to guess how the book would end, that  I was in on the conspiracy. This book is ideal for those who love their RomCom's that are also fast paced and witty. If you are not a fan of RomComs, then I urge you to give this book a whirl!

Miss Wrong and Mister Right  is published by Bookouture and can be found on Amazon here.

Robert Bryndza is the author of the international #1 bestseller The Girl in the Ice. The Wall Street Journal and USA Today bestseller is the first book in the Detective Erika Foster series.

The Night Stalker, and Dark Water are the second and third books in the series, and you can now pre-order the fourth, Last Breath which will be published on April 12th 2017.