Butterfly on the Storm: Heartland Trilogy Book 1 by Walter Lucius 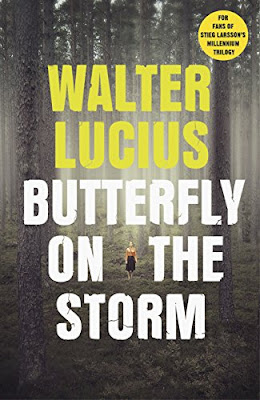 About Butterfly on the Storm: Heartland Trilogy Book 1


A young boy is found in woods outside Amsterdam. Broken and bloody, he appears to be the victim of a brutal hit-and-run. When the police at the hospital ask what happened, the one word the boy repeats they don't understand.

But journalist Farah Hafez does. She left Afghanistan as a child and she recognizes her native tongue. As the boy is taken into surgery she finds herself visiting the scene of the crime, seeking to discover how a little Afghan boy came to be so far from home.

Instead, she comes across a burnt-out car with two bodies inside - a sinister clue to something far darker than a simple road accident.

It is just the start of a journey that will lead her from one twisted strand to another in an intricate web of crime and corruption that stretches across Europe and deep into a past that Farah had sought to escape - a past that nearly killed her.

Butterfly on the Storm is the first in a tense, atmospheric and gripping new trilogy which has drawn parallels with Stieg Larsson's Millennium series.

My review of Butterfly on the Storm: Heartland Trilogy Book 1

Well, this is a Dutch noir novel on a massively grand scale, and I hugely enjoyed it. This is the first book in a trilogy that introduces us to many interesting characters, whom I know I will enjoy getting to know more about in the following two books.

Butterfly on the Storm opens with a powerful prologue that literally draws you in. I could not put this book down. We learn that a young boy has been found in the woods of the Amsterdamse Bos, presumably a hit and run. With the boy left for dead, it is up to the police to find out what happened to him, and from this point on there are a series of events that link several characters together for the reminder of the book, as we visit Africa and Russia as the story progresses and the tension mounts. What begins as a young boy found for dead, dressed in girls' clothes and make-up, turns into something even more sinister and which spans the globe.

Now, the beginning for me was a little implausible, in the description of the police procedures that took pace. Firstly, we have the police arriving on the scene, once the young boy has been taken to hospital. They cordon off the area, but that seems to be all that they do. They do not do a thorough search, even though the boy was found in the middle of nowhere in the middle of the night. Then they let a journalist, Farrah Hafez, enter the crime scene and answer her questions. They fail to pick up a piece of vital evidence, that Farrah later on finds very easily, and they also fail to locate a nearby manner house. Additionally, a car is found on fire a short distance away in the woods, but they fail to piece the two incidents together, even with two bodies found inside the wreckage. These points niggled me, and although they didn't take away from my enjoyment of the book, these aspects did push the boundaries of reality.

This book is full of colourful and descriptive characters, all flawed in some way. Some I loved, others I detested, but all were interesting. We have the police duo of Joshua Calvino, a young Italian detective, and his senior partner, Marouan Diba. Calvino is like an open book, instantly likeable, whereas, Diba took some getting used to, and as we learn, he has his own secrets to hide. The two worked very well together on the page, they bounced off each other, and I liked this pairing of good cop and bad cop. For me though, it was the strong women that took centre stage in this hovel.

Farah Hafez is a strong yet confusing character. She has a heart of gold, and is incredibly sensitive, yet is a woman who has anger issues and whom beat her fighting opponent into a pulp. She took a long while for me to grasp, but I did eventually like her. Dr Danielle Bernson, the doctor who attends the young boy is instantly more likeable, but we learn that she is strong because she has to be, because of what has happened to her in the past. Both women have a past that they would like to forget, but they are determined to not let their past lives shape who they are today.

Butterfly on the Storm has been compared to Stieg Larsson’s Millennium series (which I loved), but to do so is unfair. Perhaps the comparison has been made because of the fact that Farah is a journalist? That she is helping the police to solve this brutal crime, in very much the same way as Mikael Blomkvist assists the police?  But for me this was where the comparisons ended.

Butterfly on the Storm should be judged on its own merits. This is an ambitious book, one that deals with tough and difficult subjects, and I feel it's true magnitude and presence will only be fully realised once the trilogy is complete. I enjoyed reading this first book and eagerly await to read the second book in the Dutch noir series.

With thanks to Penguin and NetGalley for the Advanced Reader Copy.

Butterfly on the Storm: Heartland Trilogy Book, is published by Penguin on 30 Mar. 2017. It can be found on Amazon here.

Walter Lucius is the pseudonym of screenwriter, director and producer Walter Goverde. Walter used to be a stage director, and also produced dramas, documentaries and various television series.

He founded Odyssee Producties, an audio-visual company with which he carried out several projections for a number of Dutch government ministries.

Butterfly on the Storm is the first instalment of the Heartland Trilogy and his fiction debut.

Email ThisBlogThis!Share to TwitterShare to FacebookShare to Pinterest
Labels: Butterfly on the Storm, Penguin, Walter Lucius