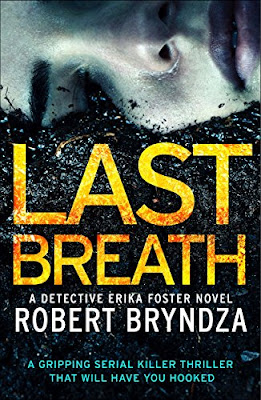 He’s your perfect date. You’re his next victim.


When the tortured body of a young woman is found in a dumpster, her eyes swollen shut and her clothes soaked with blood, Detective Erika Foster is one of the first at the crime scene. The trouble is, this time, it’s not her case.

While she fights to secure her place on the investigation team, Erika can’t help but get involved and quickly finds a link to the unsolved murder of a woman four months earlier. Dumped in a similar location, both women have identical wounds – a fatal incision to their femoral artery.

Stalking his victims online, the killer is preying on young pretty women using a fake identity. How will Erika catch a murderer who doesn’t seem to exist?

Then another girl is abducted while waiting for a date. Erika and her team must get to her before she becomes another dead victim, and, come face to face with a terrifyingly sadistic individual.

Gripping, tense and impossible to put down, Last Breath will have you on the edge of your seat, racing to the final dramatic page.

My review of Last Breath

Last Breath is the fourth installment in the Erika Foster detective series by Robert Bryndza, and the first book in the series that I have read...and WOW, I loved every page. This is an exhilarating read that gripped me from the incredibly chilling Prologue. Unlike many other reviewers who have read the books in order, I came to this book knowing absolutely nothing about the characters or their backstory, but for me this really didn't matter, as I felt like I was not missing out. This really does work as a stand alone novel. Having said that, I do plan on working my way back through the previous three books.

So, Last Breath is about a sadistic serial killer who preys on women. He uses a false identity while online to stalk his victims. Robertt Bryndza has created a chilling and truly unforgettable serial killer. He is the man who you could walk past on the street and not be aware of the horrific crimes that he has committed against women. He is the man who you could befriend. It is spine chillingly real. That is why this book works so well, the events could happen, and they could happen to you.

DI Erika Foster leads the investigation, and is a character that I quickly got to know, as she wears her heart on her sleeve. She is feisty, opinionated, caring and will ultimately do whatever it takes to catch the bad guy. I had a lot of respect for her. But equally, I did too for Moss and Peterson, her colleagues. Together they made a great team, supporting each other. This leads me onto the investigative procedures and how the crime scenes were investigated. Once again, everything was painstakingly real, making me live the moment when they found  the body of a young woman, thrown away, discarded like a piece of rubbish into a dumpster. I felt what Erika felt, and I too wanted to catch him.

Last Breath is a thrilling serial killer read that will have you on the edge of your seat. It deals with the issues of online dating, social media, the issues of online safety and of how women are portrayed as victims in a clever and empathetic way. One scene in particular stuck in my mind, as Erika so eloquently pointed out that she could have been one of these young women in her younger days. All it takes is to walk down the wrong street or to be delayed by a few minutes. This thought stayed with me. Last Breath is a disturbing read, a thought provoking read and a book that is simply unputdownable.

Last Breath published by Bookouture on April 12, can be found on Amazon here.


Robert Bryndza is the author of the international #1 bestseller The Girl in the Ice. The Wall Street Journal and USA Today bestseller is the first book in the Detective Erika Foster series.

The Night Stalker, and Dark Water are the second and third books in the series, and the fourth book, Last Breath, has just been published.