The Escape by C L Taylor 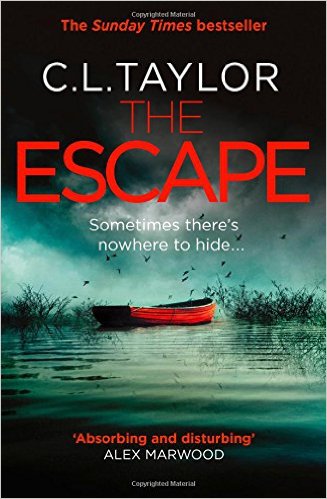 When a stranger asks Jo Blackmore for a lift she says yes, then swiftly wishes she hadn't.
The stranger knows Jo's name, she knows her husband Max and she's got a glove belonging to Jo's two year old daughter Elise.

What begins with a subtle threat swiftly turns into a nightmare as the police, social services and even Jo's own husband turn against her.

No one believes that Elise is in danger. But Jo knows there's only one way to keep her child safe – RUN.


My review of The Escape
I have read several of C L Taylor's books, and so, was very excited when I got the opportunity to read and review her latest novel, The Escape. This is a thoroughly gripping, psychological thriller that deals with trust, deception and lies within a family. At the heart of this book is the question, who can you really trust?
The novel begins when Jo is approaching her car, on route to pick up her little girl from nursery. She is in the University car park when a stranger approaches her and asks for a lift. As soon as I read the dialogise between the two women, I knew that something was not right, and that this stranger, Paula, was not all that she seemed. Once in the car, she gives Jo a glove that belongs to her daughter, telling her that she knows Jo's husband, Max, and she makes a subtle threat, in telling Jo that he has something that she wants back. Jo is visibly shaken and the seed of doubt is planted.
We learn that Jo has suffered from depression and mental health issues following the loss of their baby son.  She is acrophobic and suffers from anxiety. It is these factors that go against Jo in the book, and have a devastating effect upon what happens to her and her daughter Izzy.
We read as Jo's normal family life begins to crumble around her. She is not sure if she can trust her husband, nor indeed if he is telling her the truth about Paula. Plunged into self doubt, Jo realises that the only person she can trust is her best friend and herself. The book is about being a mother, and the fact that you would do everything in your power to protect your child. The bond between Jo and her daughter is so clearly evident, and I never doubted her capacity to love and care for her child.
This book is a psychological thriller, as we question the characters we meet along the way, wondering who on earth we can trust. Who is telling the truth, and who wants secrets to be buried? As with all C L Taylor's books, we are kept in the dark until the very end when all of the loose ends are toed up.
I read this book very quickly, in a few short sittings, which is very unusual for me. I simply could not put it down, willing myself, to read 'just one more chapter'. I think that this was to do with the fact that Jo was all consuming. I wanted her to survive, to be believed, to live a happy life. By the end of the book I was firmly on her side and rooting for her to have the life that she truly deserved.
The Escape is about the need to escape from lies and deceit, and to find a life that is truly your own. Ultimately, it is about self discovery and believing in yourself.
The Escape is published by Avon on March 23 and can be found on Amazon here.
With thanks to the publisher and NetGalley who provided an Advanced Raeder Copy.

CL Taylor lives in Bristol with her partner and young son. She studied for a degree in Psychology at the University of Northumbria, Newcastle and has worked as a sales administrator, web developer, instructional designer and as the manager of a distance learning team at a London university. She now writes full time.

CL Taylor's first psychological thriller THE ACCIDENT was one of the top ten bestselling debut novels of 2014 according to The Bookseller. Her second and third novels, THE LIE and THE MISSING, were Sunday Times Bestsellers and #1 Amazon Kindle chart bestsellers. Her fourth pysychological thriller, THE ESCAPE, will be published on 23 March 2017. She is currently writing her first young adult thriller, THE TREATMENT, which will be published in September 2017.

Sign up to join the CL Taylor Book Club for access to news, updates and information that isn't available on the web, as well as exclusive newsletter-only competitions and giveaways and the books that CL Taylor thinks will be the next big thing: