The Darkest Lies by Barbara Copperthwaite 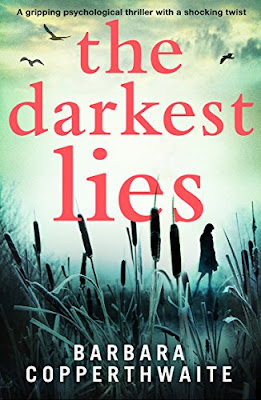 About The Darkest Lies


Melanie Oak appeared to have the perfect life. Married to her childhood sweetheart, Jacob, the couple live with their beautiful, loving, teenage daughter, Beth, in a pretty village.

Nothing can shake her happiness - until the day that Beth goes missing and is discovered beaten almost to the point of death, her broken body lying in a freezing creek on the marshes near their home.

Consumed with grief, Melanie is determined to find her daughter’s attacker. Someone in the village must have seen something. Why won’t they talk?

As Melanie tries to piece together what happened to Beth, she discovers that her innocent teenager has been harbouring some dark secrets of her own. The truth may lie closer to home and put Melanie’s life in terrible danger…

A completely gripping psychological thriller with a twist you won’t see coming. Fans of The Girl on the Train, The Sister and Before I Let You In will be captivated.

My review of he Darkest Lies

The Darkest Lies is a captivating and brilliant read from Barbara Copperthwiate. This novel takes the ideal and seemingly perfect family unit and turns it on its head. Secrets are kept in this tiny rural village, located by desolate marshland and, as a reader, I got to spy on all of its occupants. This is a somewhat disturbing, chilling read that had me racing through the pages, savouring every word. I found it hugely enjoyable.

The novel is fast paced throughout, it really doesn't let up from the moment you read the somewhat chilling prologue. It left me frantically gripping onto the cliffhanger, wondering what on earth had just happened. It's such a clever start to the novel and sets the scene beautifully for just how desolate the marshes are in this quiet and sleepy little rural village. In fact, the way in which the village and its inhabitants are evoked is so descriptive, I actually felt like I lived there.

The Darkest Lies illuminated family life and that every perfect family has its own share of secrets. When thirteen-year-old Beth is found left for dead in a cold creek on the boundaries of the village, Melanie begins her own investigation in the village to find out what happened to her daughter and who attacked her. What she discovers is that her daughter had her own share of secrets and Melanie begins to question who she can trust. Melanie was an interesting character and I understood her completely. Partly because she is a mother like me, and that as a mother you would do everything in your power to protect your child. I understood her need to find out the truth and I was with her one hundred percent on this. I also believed in her because of the skilful witting, I saw what she did, I was with her every step of the way during her journey, during every twist and turn.

This is a dark novel, and I'll admit that it unsettled me. The fact that a family could have their entre world turned on its axis was shocking. I could have been reading about my family, or a family down the road. Parents who loved each other, and their daughter, began to question each other and had to face the harsh reality that they didn't know everything about their not so little girl. This is what really unsettled me, that our children are not children forever and that they need to forge their own path. It's just that sometimes we have no idea of what is really going on in  their lives.

This is really a novel of two stories. We have Melanie's story, as she strives to find her daughter's attacker and uncover her hidden secrets, as well as the story from the attacker's point of view, an unknown voice that I found completely compelling. The two timelines work wonderfully well together and create a gripping narrative, right until the final, surprising twist. I honestly did not see it coming.

The Darkest Lies is a dark, compelling and unforgettable read that had me hooked from the very beginning. The final paragraph haunted me, long after I had finished reading.

The Darkest Lies is published by Bookouture on 12 May 2017. You can find the book on Amazon here.


Barbara is the author of psychological thrillers INVISIBLE and FLOWERS FOR THE DEAD. Both have been Amazon best sellers. Her latest book, THE DARKEST LIES, is out on 12 May.

Much of her success is thanks to her twenty-odd years' experience as a national newspaper and magazine journalist. She's interviewed the real victims of crime - and also those who have carried those crimes out. Thanks to people sharing their stories with her, she knows a lot about the emotional impact of violence and wrong-doing. That's why her novels are dark, realistic and tackle not just the crime but its repercussions.

When not writing feverishly, she is often found hiding behind a camera, taking wildlife photographs.