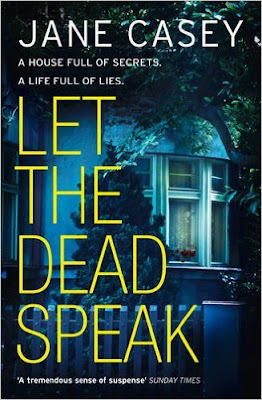 About Let the Dead Speak

In the chilling new crime novel from award-winning author Jane Casey, Detective Maeve Kerrigan and the murder squad must navigate a web of lies to discover the truth…

A murder without a body
Eighteen-year-old Chloe Emery returns to her West London home one day to find the house covered in blood and Kate, her mother, gone. There may not be a body, but everything else points to murder.

A girl too scared to talk
Maeve Kerrigan is young, ambitious and determined to prove she’s up to her new role as detective sergeant. She suspects Chloe is holding something back, but best friend Bethany Norris won’t let Maeve get close. What exactly is Bethany protecting Chloe from?
A detective with everything to prove
As the team dig deeper into the residents of Valerian Road, no one is above suspicion. All Maeve needs is one person to talk, but that’s not going to happen. Because even in a case of murder, some secrets are too terrible to share…

My review of Let the Dead Speak


This is the first Jane Casey book that I have ever read, so I am new to the world of Detective Maeve Kerrigan. I absolutely loved this book, and so shall be rooting out the previous books in the series to read during the summer.

I was initially drawn to this book because of the interesting premise that a murder had taken place, but that there was no body at the crime scene. I wanted to find out how the police solved this puzzle.

So, eighteen-year-old Chloe Emery returns home early from having been away, visiting her father, to find the home that she shares with her mother, Kate, covered in blood., and her mother missing, presumed dead. It is from this point onwards that we follow the police in their investigation to find out exactly what happened.

What really made this book stand out for me though was the two leading characters of Maeve and DI Josh Derwent. There on page chemistry simmered and I wondered why on earth they weren't together. However, as this is the first book that I have read in the series, I knew nothing of their past relationship,  although we are told that they have never been involved in a romantic relationship. To me, it was fairly obvious that they belong together, and I have my fingers and toes crossed that this will happen in future novels.

This is a thoroughly entertaining read! It is fairly dark in nature, with serious issues being discussed regarding the sexuality of women, the sexualisation of women by men and issues of consent. But what was we do have is an incredibly strong female lead in the form of Maeve, whom you can't help but love and admire. Here is a woman who wears her heart on her sleeve and who would do anything to protect the innocent. She is hugely likeable and someone whom I admire.
Let the Dead Speak is a dark, griping and enjoyable detective story that is full of twists. This fabulous plot is further enhanced by completely relatable characters and a cast of male suspects, none of whom I liked, and that was the way it should be. I literally had no idea of who had done what or why, and I was left guessing until the very end. I enjoyed this book immensely and look forward to reading the next in the series.
Let the Dead Speak, published on March 9 by Harper Collins, is available to buy from Amazon here.

"All my criminal elements have some basis in reality, no matter how awful they may be. Nothing is completely farfetched." Jane Casey

Crime is a family affair for Jane Casey. Married to a criminal barrister, she has a unique insight into the brutal underbelly of urban life, from the smell of a police cell to the darkest motives of a serial killer.

This gritty realism has made her books international bestsellers and critical successes; while Detective Constable Maeve Kerrigan has quickly become one of the most popular characters in crime fiction.

Winner of the Mary Higgins Clark Award for The Stranger You Know, Jane has been shortlisted four times for the Irish Crime Novel of the Year Award and longlisted for the CWA Dagger in the Library Award.
Posted by jo at 05:00