Behind Her Eyes @SarahPinborough @HarperCollins 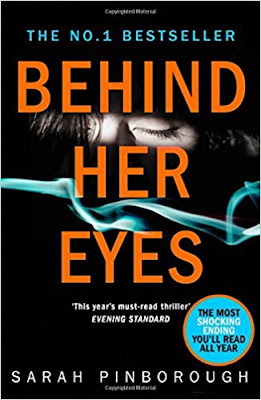 About Behind Her Eyes

And whatever you do, DON’T give away that ending…

‘Sarah Pinborough is about to become your new obsession’ Harlan Coben

Since her husband walked out, Louise has made her son her world, supporting them both with her part-time job. But all that changes when she meets…

Young, successful and charming – Louise cannot believe a man like him would look at her twice let alone be attracted to her. But that all comes to a grinding halt when she meets his wife…

Beautiful, elegant and sweet – Louise's new friend seems perfect in every way. As she becomes obsessed by this flawless couple, entangled in the intricate web of their marriage, they each, in turn, reach out to her.

But only when she gets to know them both does she begin to see the cracks… Is David really is the man she thought she knew and is Adele as vulnerable as she appears?
Just what terrible secrets are they both hiding and how far will they go to keep them?

My review of Behind Her Eyes 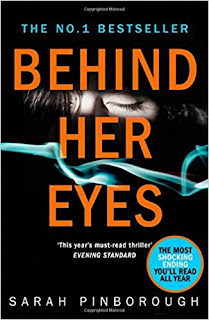 Well I finally got around to reading Behind Her Eyes and what a fantastic book it is. I really enjoyed this domestic psychological thriller with THAT much talked about ending, and yes, I never saw it coming. It's a brilliant read. The book revolves around the issues of trust, infidelity and relationships and has two unreliable narrators, Louise and Adele, both of whom tell their own story, and I honestly didn't  know who to believe. This is a compulsive read, I honestly couldn't put it down.

This story really is a tangled web of secrets, lies and deceit and its brilliant. The words flow and the chapters just flew by on my need to find out how things would end between these three central characters. We also read about Adele's past that helps to shed light on the present day events.

Although this book has been rightly adorned with the hashtag #WTFthatending it is so much more than that ending. This is a psychological thriller that delves into what makes a relationship work, the power between a couple, about who has power and who has a more prominent voice. It is a story that explores the friendship between women, and of how women support and care for each other. It is also an exploration into loneliness and how you can feel alone, even in a marriage.

The three central characters in this book are simply captivating, and I will admit to only liking Louise, as I completely 'got' her. The single mum, trying to make ends meet, trying to survive and who is just trying to do her best. But what really intrigued me was the relationship between Adele and David. Whose version of events was true? I honestly didn't know who to believe, not until the very end.

Behind Her Eyes is a book about obsession, love, lust and plenty of secrets. I'll be honest and say that this book really messed with my head, but what a journey. Just brilliant!

Behind Her Eyes was published in paperback by Harper Collins on 7 Sept. 2017 and can be found on Amazon here.