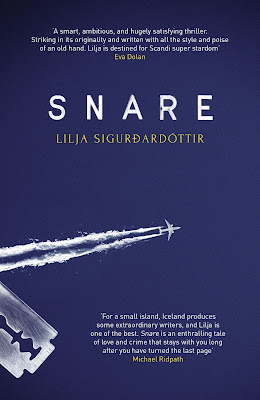 A stunning thriller the first in the Reykjavik Noir series - by bestselling Icelandic crime writer, with an unforgettable lesbian protagonist.

After a messy divorce, attractive young mother Sonia is struggling to provide for herself and keep custody of her son. With her back to the wall, she resorts to smuggling cocaine into Iceland, and finds herself caught up in a ruthless criminal world. As she desperately looks for a way out of trouble, she must pit her wits against her nemesis, Bragi, a customs officer, whose years of experience frustrate her new and evermore daring strategies. Things become even more complicated when Sonia embarks on a relationship with a woman, Agla. Once a high-level bank executive, Agla is currently being prosecuted in the aftermath the Icelandic financial crash. Set in a Reykjavik still covered in the dust of the Eyjafjallajokull volcanic eruption, and with a dark, fast-paced and chilling plot and intriguing characters, Snare is an outstandingly original and sexy Nordic crime thriller, from one of the most exciting new names in crime fiction.

My review of Snare 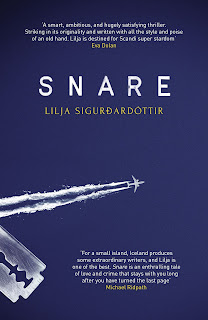 Snare is the first book in the Reykjavik Noir trilogy and what a brilliantly fantastic book it is. This book is like no other I have ever read. It's a dark thriller but with a deeply human element that both fascinated me and touched my soul. It's that type of book. The characters stay with you long after you turn the final page, in particular those of Sonia and Bragi.

The book is told from several viewpoints, that help to shed light on the darker and more murky side of life. All chapters are short, which help to increase tension and quicken the pace. I honestly couldn't put this book down.

We read Sonia's point of view. A recently divorced and single mother who finds herself trapped in the snare, frantically trying to provide for her young son. She will do anything to keep her son. Sonia is truly unique and utterly likeable. She is a strong willed, smart and sexy woman, who will do anything for her son. I completely understood this character and empathised with her plight.

On the other side of the fence we have Bragi, the ageing customs official, who, with a keen eye and years of experience, becomes Sonia's worst nightmare. He too has his own struggles and I loved his backstory, that of a family man, a working man, who thrives on routine and the need to care for his wife. He too is likeable and complex, just as Sonia is, and I instantly warmed to him.

We also meet Agla, Sonia's on and off lover, who works in finance and, who finds herself having to deal with the aftermath of the financial crash in Iceland. Here we have a woman who is confident, bold and straight taking when it comes to her working life, but who is the complete opposite in her private life. For example she refuses to acknowledge the fact that she is a lesbian.

The novel is set within the heart of Iceland and after the  Eyjafjallajokull volcanic eruption. I really felt as if I was living there, I got a real sense of the environment and the locals who lived there.

This is a book that is so much more than a dark thriller. Yes it is utterly brilliant plot wise, full of twists, but it is also the story about a mother who wants to provide for, and keep, her son. That's what is at the heart of this story, that much needed personal and emotional element, and that is what I feel makes this book so very special. It really is unlike anything I have ever read before, and I feel that the literary world will happily embrace this new female protagonist.

Snare was published by Orenda on 1 Oct. 2017 and can be found on Amazon here. 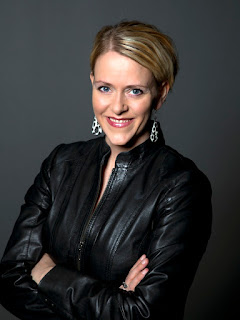 Her debut stage-play Big Babies (Stóru Börnin) was staged in the winter of 2013-2014, became critically acclaimed and won the Icelandic Theatre Prize Gríman as “Best play of the year.”

Lilja´s latest book, Tangle, (Netið) was published in Iceland in October 2016 by Forlagid publishing. The rights to the novel have already been sold to France/Switzerland/Luxembourg/Canada (Éditions Métailié); World English (Orenda Books) 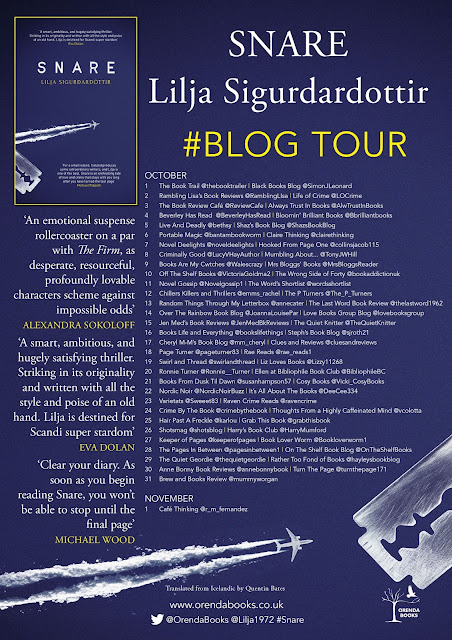