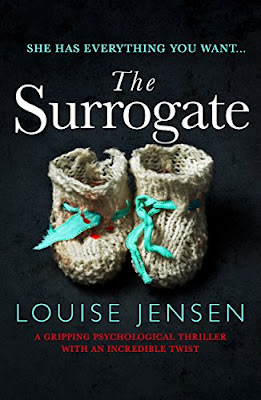 You know that feeling? When you want something so badly, you almost feel you’d kill for it?’

Be careful what you wish for…

Kat and her husband Nick have tried everything to become parents. All they want is a child to love but they are beginning to lose hope. Then a chance encounter with Kat’s childhood friend Lisa gives Kat and Nick one last chance to achieve their dream.

And there is more to Lisa than meets the eye.

As dangerous cracks start to appear in Kat’s perfect picture of happily-ever-after, she realises that she must act quickly. But is she willing to uncover the darkest secrets of her past in order to to save her family? 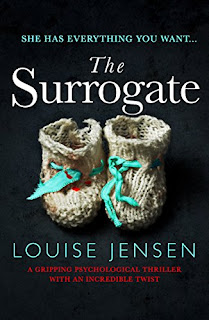 My review of The Surrogate

The Surrogate is a dark, engaging and a nail biting psychological thriller that sucked me in from the very beginning. This is one creepy, twisted tale that focusses upon buried lies and deceit. It's nothing like the cover would suggest, as initially I thought it would be about two women sharing a bond through pregnancy, and would be a heart warming tale. In that respect, the cover and tithe are very clever.

We meet married couple, Kat and Nick, who have been trying to get pregnant for several years,  and who have gone down the adoption route, but have been unsuccessful. My heart went out to Kat, a woman who so desperately wants a child, who would do anything to have a child of her own. It is when Kat meets Lisa in a coffee shop, who is an old school friend, that she begins to think that her dream of becoming a mother may actually become a reality. However, what first appears as a dream come true slowly has the seeds of doubt planted. Is Lisa who she seems to be? Does Nick really want a child? There are so many unanswered questions and a real sense of foreboding starts to creep in.

I really liked Kat. I got who she was and what she was wanted in life. That yearning to be a mother, I undersold that as a mother myself, and I felt as if I understood her motives. Her husband, Nick, on the other hand I just couldn't warm to. He never really warmed to the idea of surrogacy, and I wondered what the reasons were behind these feelings. As for Lisa, well, she truly confused me. From the moment I met her I wondered how she had found Kat, and what her true intentions were. She fascinated me, and I wanted to learn her story. All three of these characters spin a luscious web made from lies and deceit, and as I progressed through the novel, my loyalties shifted, not knowing who to trust or believe. What really happened between Lisa and Kat? That's the big question.

This book really is full of twists and turns and I honestly didn't know who to believe, or where my sympathies should lie.  The idea of turning the theme of surrogacy into something that is dark and sinister is pure brilliance. I really was hooked on every word, and as for the ending... well I wasn't expecting it at all, but it was brilliantly stunning.

The Surrogate is an engaging, dark, and twisted read that will keep you guessing. I loved it!

With thanks to the publisher and NetGalley for an Advanced Raeder Copy.

The Surrogate was published by Bookouture on 27 Sept and can be found on Amazon here.
Posted by jo at 05:00