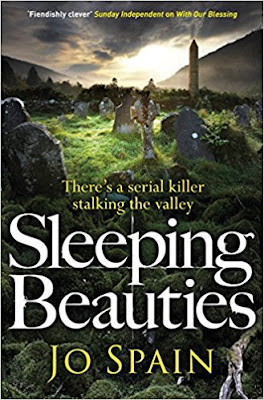 The inspector frowned and examined the earth under the trees. As he scanned the glade, his stomach lurched. One, two, three, four. Five, counting the mound of earth disturbed under the tent. Somebody had cleared the earth of its natural layer and sown their own flowers

A young woman, Fiona Holland, has gone missing from a small Irish village. A search is mounted, but there are whispers. Fiona had a wild reputation. Was she abducted, or has she run away?

A week later, a gruesome discovery is made in the woods at Ireland's most scenic beauty spot - the valley of Glendalough. The bodies are all young women who disappeared in recent years. D.I. Tom Reynolds and his team are faced with the toughest case of their careers - a serial killer, who hunts vulnerable women, and holds his victims captive before he ends their lives.

Soon the race is on to find Fiona Holland before it's too late. . .

My review of Sleeping Beauties 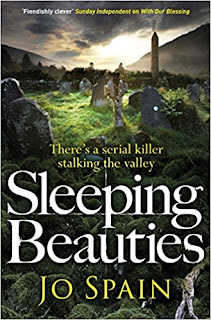 Sleeping Beauties was an absolute joy to read. This book simply has it all - murder, mystery, suspense, wonderful characters and a dash of romance. The book had me hooked from the very first chapter. Although this is the third book in the Inspector Tom Reynolds books, this works very well as a stand alone novel.

The novel begins in the heart of the Irish countryside when five shallow graves are discovered, all of which are young women. When Fiona Holland goes missing, the race is on to find out who the murderer is and if Fiona is the next victim.

The team is headed by Inspector Tom Reynolds and his tight knit team including DS Ray Lennon and DS Laura Brennan.  The banter is fast, witty, the action quick and methodical. There is enough attention to police procedures but without being weighed down in all of the technicalities, instead the focus is upon the people who are leading the investigation and those who are involved. It is very much a character driven narrative with an engaging serial killer plot.

The story is interspersed with first person accounts from the five women who were killed, that helps to shed light upon the human and emotional angle about what happened to these women. As well as helping us, the reader, to establish what happened to them, it also helps us to realise that the bodies that are found had a life, a story,  and that they mattered.  The novel deals with issues of sexual abuse and violence towards women, and the author manages to create a sensitive read with the women's voices being powerful and of importance. It is a novel that explores the power of women, and of women's sexuality, and of how this is perceived by society. This is reinforced with the character of DS Laura, she is no shrinking violet and is treated as an equal by her peers.

As well as the main plot being that of catching a serial killer,  we also gain insight into the private lives of the detectives in the story. We read about DI Tom and his lovely family, and his friendship with his former chief and his wife June who is suffering from Alzheimer's. Here we meet a man who is refreshingly different from the stereotypical drinking, grumpy and lone detective, as he is happily married and generally happy. I also loved the dynamics between Ray and Laura, they made me smile and my heart skip a beat.

Sleeping Beauties really does have it all. It is a thought provoking and entertaining read and I can't wait to read the next story in the series.

With thanks to the publisher and Bookbridgr for the paperback copy for review purposes.

Sleeping Beauties was published by Quercus on 21 Sept. 2017 and can  be found on Amazon here